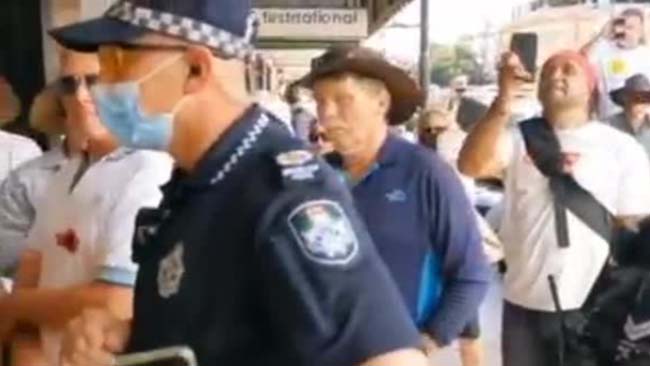 A Queensland Police officer has been given a bravery award for bullying and closing down a small business that didn’t comply with COVID directions.

Sgt Richard Head was given the award after shutting down Bar Wunder in Toowoomba who refused to comply with COVID directions.

“This is what you really sign up for, going in and acting as a glorified mafia capo collecting protection money on behalf of the government,” Sgt Richard Head said.

“I haven’t lost a pay cheque the last two years while these guys are drowning under regulatory burden, so they need to obey the law and I’m just doing my job. My grandfather was a Soviet NKVD officer, so I’m carrying on his legacy.”

The award will be given at the annual Australia Day awards on January 26th.

Approx 1 in 5500 for myocarditis in young boys. That’s the official, reported figure so it is likely worse. How is this a good value proposition for kids; and their parents?

They really are going to look through all negative aspects of this and persevere with it regardless. Trust the science, safe and effective. This is like living in the acid house movie.

Do they have a choice, Big Pharma have indemnity in the contracts so people who are dying or suffering side effects are going to be going after the government.

Trust me when this plays out over time, Jams Hardie is going to look like girl guides selling brownies not asbestos in comparison.

That’s the problem. The longer this goes on the bigger it gets. The more people are going to be looking for blood. They could just about get away with it without including the kids. Their insistence on including the kids is pure evil. I hope all these fuckers burn.

They could bring back that crypt creature Julie Bishop to represent big pharma instead of the asbestos crowd. She would be perfect for it.

represent big pharma instead of the asbestos crowd.

Big pharma don’t care, they forced all the risk and responsibility onto the governments. Taking lessons off the banks.

It has always amused me how you can put a munter in a frock and shinny shoes , and put em on teller and the boys all go whoooo.

Her and the all tutting goose pliberseek.

They are all sixes and eights. That’s how many pints it would take

I was pondering the same.

The local talking heads think they are immune from international law. I can see the local beaks towing the line until the switch is flicked and then retrack with some artfully dropped weasal words from the past.

I reckon a war is the only get of jail card for these cunts.but the solution won’t come from Australia.

The charge against this will be mounted by some euro legends. Not some vibrant cunts who have come here to go with flow and who are just happy not to live in others armpits.

I have found some solace in some off the wall cuntface groups. Some good humour. However this morning I saw that mole from down south state how only 3 deaths in said age group from nearly 400k waxings, and being happy about this FFS.

I agree that change will have to be instigated from abroad, either the US or Europe and it looks as though our politicians will have to be shamed into changing course.
I will never forgive or forget what these bastards have done and I won’t be letting them slink away when this all turns to custard and they try to change the narrative that they were always against it. Almost every one of these politicians are complicit. Fuck them all.

Apparently, all cases of vaccine induced heart inflammation are mild according to the Narrative.

As if having an inflamed heart is a harmless trifle and nothing to be concerned about.

I reckon we will see a huge increase in heart transplant waiting lists and that these bastards will say the cause is something stupid like post pandemic stress disorder.

Just bad luck, but I find it hard to believe. That would mean out of a population of 25 million only 500 cases of heart inflammation assuming all 25 million vaccinated. Some how I don’t believe that.

The official stats are massively underreported and often times misdiagnosed. I mentioned a while back that I think to there is a backlog of these events. Very little has been added over Christmas due to the holidays. People are having to go to multiple doctors appointments to zero in on what these adverse effects are.
A lot are being dismissed by supposed doctors because they couldn’t be arsed and don’t want to rock the boat. A safe bet would be that the figures are 3 to 4 times worse than what is being quoted here. And remember this doesn’t include any long term data.

My daughter had pericarditis from the jab, one of her friends got blood clots almost did not make it, her friends mother got myocarditis, we are now up to 10 people of 180 in my office that have pericarditis.

So not at all rare, I would say around 5-10% given the underreporting of symptoms.

That’s insane. Those anecdotal numbers are terrifying. I’m finding the people that are too invested in this won’t go to the effort of reporting the adverse events and they won’t even tell their family members if they get a reaction. My mother didn’t tell me that she has permanent weakness in her arm after the AZ shot. I found out 4 months after the fact and told her to report it. She is so conditioned that she thinks that it’s her fault

and they won’t even tell their family members if they get a reaction. My mother didn’t tell me

yes, yes, this indeed happens. People don’t reveal how shit they had it until much much later.

My parents have swallowed the wartime propaganda from the authorities and media hook, line and sinker, so the are fully convinced they are fighting a war against the virus and that they are performing their civic duty. So all negatives with the vaccine are approached with a stoicism that is not at all deserved in this instance. It means having a logical conversation with them is difficult.
So you would think that after the drama with the AZ double dose that they might be more sceptical. Nah. Both of them went for their moderna boosters over Christmas and they are now wondering why they are going around with permanent cold like symptoms.

3 sudden and unexpected heart attacks of 50-ish people at my workplace in the space of a few months. Unprecedented.

I’m not the only one to notice. A new member of my team is invaccinated, and he’s joined the dots about the deaths too, although he had a sister and and aunt IIRC with myocarditis after their jabs, so he was forewarned. No jabs for him.

Obviously the heart problem rates are significantly under reported.

This is ridiculous! Handing out awards like he’s saving people when in actuality he is discriminating against everyday civilians who pose no risk to health and safety of the community. Shame on you!!

Fair play to the public standing up to the cops.

It gives me hope that there are still some Aussies with spirit left, not just sheeple everywhere