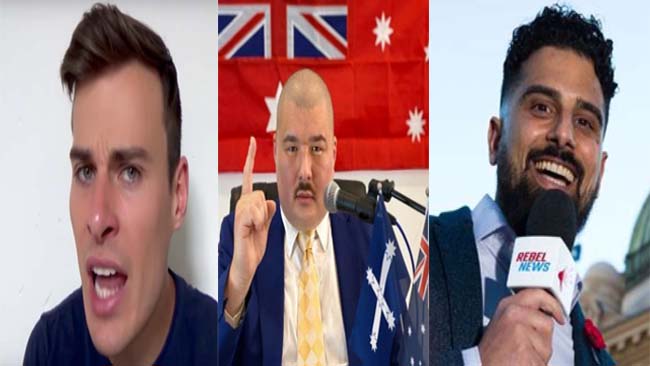 Three of EZFKA’s finest grifters have made the honours list, after being nominated for the 2021 Grifter of the Year Award.

Friendlyjordies, Aussie Cossack and Avi Yemeni will wait to see who will take home the coveted award, which saw a larger than usual field this year. The awards are judged on traits such as asking for money, ability to stay within the Youtube algorithm by saying nothing genuinely controversial, steering the public towards useless outcomes and political gatekeeping ability.

“I’m honoured to be nominated for the third straight year. My ‘Team Blue bad, Team Red good’ schtick has proven it still has some legs yet,” Friendlyjordies said.

“The John Barilaro thing tipped me over this year. I mean, they just replaced him with another corrupt cog in the machine and nothing of any substance has changed, but I’ll still milk it to my core audience of politically disaffected, centre-left man-children for all it’s worth.”

“It’s an honour to be nominated for the first time. It was exhausting provoking my own unnecessary arrests with the Police so I could drive up those Youtube likes with notoriety. The advertising revenue however, has paid for all those flags to convince you how ‘Aussie’ I am apparently,’ Aussie Cossack said.

“Australia has never been so divided, that’s why we need more multiculturalism as I mention in all of my videos. In 2022, we drain the swamp with a guy who is part of the swamp funded by a billionaire who is also part of the swamp! Vote UAP!”

Three-time winner Yemeni said he was confident of winning a fourth award and thanked his Indian fans for their earlier support of Israel during the 3rd Intafada of 2021.

“You know, I thought when Aussie Cossack started filming himself getting arrested and playing the victim I had some real competition. But I have far more experience and more paid actors at my disposal willing to stage confrontations on camera,” Yemeni said.

“Make sure you keep signing the petitions so I can sell your data to marketing firms. All the Fight the Fines money has dried up, and your signatures keeps me and Rebel News going! Just ask Chris Sky!”

The award is expected be announced during the Australia Day awards.

I bet Yemeni has already been vaxxed 4 times.

I’m amazed people still donate to the Ezra Levant slush fund…sorry Rebel News legal funds. They give Anita Sarkeesian a run for her money in terms of grifting ability.

Aussie Cossack is a tool. Saw him at the Melbourne protest in a pretty expensive Brooks brothers suit because you know, man of the people.

Only so many times you can provoke your own arrest for YouTube before people realise you’re the same as Avi.

+1. The professional provocateurs are all the same regardless of which side of politics they pretend to support.

I wanted to see how the MSM were reporting on the Indigenous protesters setting Old Parliament House on fire. It was really anti-semites!

Is Lidia Thorpe legit stupid, a deliberate fifth columnist on aboriginal issues or both?

Look at her last name. Probably British peerage. So chances are she is actually a crypto-Jew/Phoenician navy/Baal-Tanit cult.

Thorpe is an old name, and it seems to be related to the Brown family.

At some point the family seems to have picked up some actual aboriginal blood, but its hard to point to where – Lidia Thorpe Husband And Daughter: Meet Parents And Family On Instagram (celebsaga.com)

They say they have aboriginal blood, but the family made bank by pushing the church’s viewpoint. Interestingly, ‘The Church of England Mission to the Aborigines of Victoria operated Framlingham for a short period and handed it back to the Central Board for the Protection of Aborigines. Shortage of funds and a disagreement with the manager, Daniel Clarke, were reasons advanced for the decision. By 1867 the Board decided to move the Aborigines living on Framlingham to Lake Condah where a new Aboriginal station would be opened.’

So Daniel Clarke ran the place, and some time later a George Clarke marries Mary-Anne (née Lovett McClennan) and they have Edna Brown. But not sure what the odds are that another whitefella with the same last name happens to be in the exact same place back then.

The other thing to know about the Pheonician Navy is bloodlines are handed down matrilineally, which is why Lidia Thorpe seems to have an ex-husband who no one knows.

I’ll leave you to ponder exactly how much good the church’s attentions to aboriginals have helped aboriginals.

But this is 10 mins of research. So take with large pinch of salt.

they’ve taken the MB doomer grift and run with it

Have you seen John Adams latest sperg out? Basically airing his marriage/divorce dirty laundry out on the public domain.

Guy has lost the plot not that he had it to begin with.

Hes deleted some of them but there is a couple still up on his telegram channel.

what odds that she’s Asian
broken English and all

he 100% fits the stereotype

Ramsay is at the forefront of Mr NA jabberwocky hard push from day one. They advised contractors that wax exemptions are subject their individual assessment and each and every hospital has the right to refuse doctor’s issued exemption.
Vacci-Nazi in its true meaning

Martin North fornicated on his achievements when he ventured into politics with that American “Aussie” Salvatore Baboon (did not see him in ages now) and then lining up with the EmBee mob, particularly on fund. Davo Lewdo shat a few times all over North but in hindsight it may have been a bit of theatrics for special effects…
pity because North’s association with EmBee mob is probably making him a few good bucks but it is not working in his best interest on the long run.

I loved Martin North’s mortgage stress updates, for how utterly useless they were for years. Wonder how much more stressed everyone is now that property boomed yet again in 2021?

The modelling about as reliable as Dohertys.

every event will have its grifters and I did not notice either of these claimed to have been doing this for altruistic purposes. They all work like every other influencer inclusive of blondes with single digit IQ – creating or provoking reaction.
I cannot stand Jordie’s face but I admire him for poking the turd with a stick. It created a bad stink but we’re sure the stinker is indeed a stinker. Now onto the next circus show.
I liked Aussie Cossack for his actions awoke the rebel in me. He truly
fornicated on police actions and provoke them to expose themselves as the minions of tyranny. Is this a deflection? it depends on expectations.
Clive/Craig UAP may have been a bunch of wannabes but if they focus their politic on the most important topic (mandate on jab renunciation) that makes them the only sane party at this stage and I am compelled to get the citizenship just so that I can vote for them. Their life expectation would be about the time it takes to fulfil that single purpose.
just my 2 bobs worth opinion…