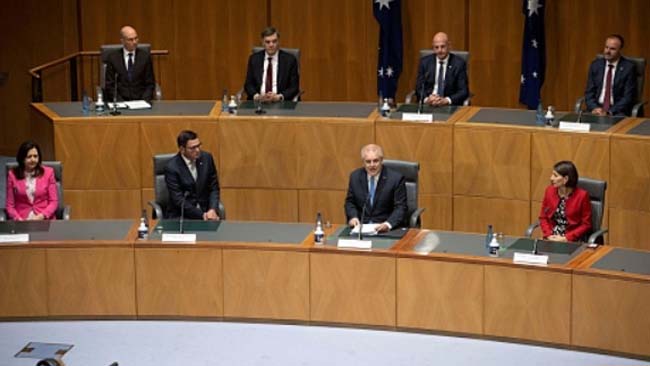 EZFKA National Cabinet has called an emergency meeting today, to determine just how many boosters are considered enough to be fully vaccinated.

Prime Minister Scott Morrison has stated he believes ten boosters would be the minimum requirement for Australians to be considered fully vaccinated.

“I have consulted with the experts and the science has shown that around ten shots is believed safe and effective to be considered fully vaccinated,” Morrison said.

“Remember, I haven’t mandated anything and this won’t be mandatory. I thank the Premiers for doing all the heavy lifting and all the bipartisan Kabuki Theatre.”

Morrison has urged Australians to go and book all of their 2022 boosters in advance, so the system doesn’t crash.

Ten total or ten a month?

I am hoping that the reality of a booster-subscription based existence is sufficient for the masses to at least pause for a minute and wonder how the hell we got here, but, alas, I am already receiving reports from friends over in Melbourne who have happily received their first booster, aka their third injection to date. God help us all.

Agent 47
Reply to  Shae The Burmese

Yep several of my colleagues already got theirs. At this point I DGAF. Israel announcing the 4th in less than a year doesn’t convince them then they’re a lost cause.

Peachy
Reply to  Shae The Burmese

alas, I am already receiving reports from friends over in Melbourne who have happily received their first booster

i have mixed reports – some are running out and getting the third shot gladly.

mothers are claiming that they will draw the line at 2….

Just in time for it to wear off before winter, but I am sure that they will be lining up for their 4th shot of gene therapy by then.

Apparently the magic number is 7. The 7th booster will be the last one.

This comes from a priest who was in the middle of an exorcism, and got it out of Beelzebub while kicking him out of some poor woman.
So pinch of salt (rock) is recommended, but would not be surprised if that is how it goes.

As said on the other thread it will always be one more, just like 18 months till the housing crash, just enough hopium to keep the punters keen.

It looks like McGowan has mandated booster shots for most of the WA workforce and hard border has returned.

No chance he reopens to the world in 6 weeks.

This is the middle of summer when COVID risk is at its lowest.

I think that the big miners are (behind closed doors, secretly) leaning on McGowan to keep the border closed HARRRRrRrRrRdD.

When there are tens of billions at stake I suppose they actually follow the science.

following the money is a method that almost never fails.

I expect that they will open the border when everyone is fed up enough with this pantomime to the point that they abolish the 7/14 day isolation for infected people.

omce that happens, the miners won’t care if people on site get the bug – it won’t interfere with production if nobody needs to be locked up.

“And for that, I have to give credit to radio and television host Tony Kornheiser who likes to tell a story about his friend Don Ohlmeyer, the legendary producer from NBC Sports. Kornheiser says that a long time ago, Ohlmeyer clarified a lot of things for him when he said, “Tony, it doesn’t matter what question you ask, the answer is money.”.”

Ohlmeyer clarified a lot of things for him when he said, “Tony, it doesn’t matter what question you ask, the answer is money.”.”

No idea about mechanism. I’ll see if I can find something.

that said, let’s see some links!

Really glad things are going well mate. Have a good Christmas 🌲 and thank you for all the support this year!

And that there is the truth that everyone seems to miss, to actually die from this you need to be pretty darn unhealthy in the first place, overfed, nearly dead, with some quality co-morbidities, for the majority of us this a mild illness.

Fuck Scomo and his cock sucking Premiers!
No jab for myself and my family, catch me if you can fuckers 🖕🏻

I break the power of this curse and I send it back to everyone who is behind this curse from the beginning to the end. The Lord rebuke you All.

Approved and posted or not, I send it back to all who devised it and those who supported it.

Hi there. Is there another link to this meeting where there’s evidence that 10 was the quoted number please. I can’t find any other info online about this statement.
Thankyou