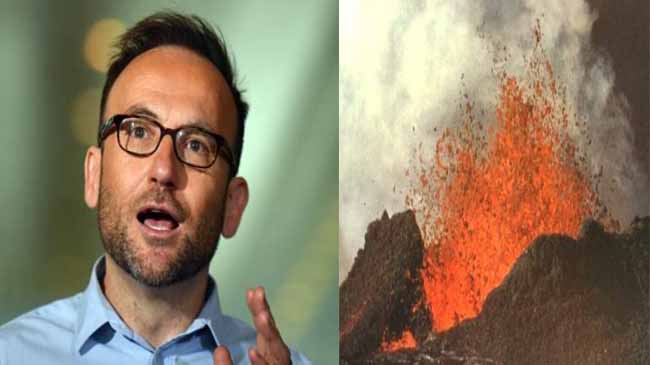 Greens leader Adam Bandt has called for a ban on all volcanoes globally, after COP26 in Glasgow was a ‘disappointment.’

Bandt, speaking from his private charter jet on with Sarah Hanson-Young, called for all volcanoes to be permanently imploded as well as a ban on lava.

“It’s quite clear that we will never reach our targets unless these heinous polluters are gone from our environment,” Bandt said.

‘Unless of course they’re in China, India or any country where white people don’t live.’

Meanwhile, a new Australian poll has found 100% of recipients believe Bandt should ‘take one for the team and jump into La Palma for the cause.’

does that mean I will have to permanently destroy my Lava Lamp?

and chalk up another one from guess who

“It’s all a lie. Hydrogen isn’t new. It is very inefficient given it takes huge amounts of energy to produce it. It’s difficult to store. If it uses gas (for blue hydrogen) it only works with CCS, another lie.”

Solutions that will actually make a difference like light colour roof, deciduous tree lined streets, home insulation and air tight homes have no financial benefit to the 0.01%.

Volcanoes actually cool the climate. Famines particularly in places like Russia have followed major volcanic eruptions. The book Super Freakonomics had something like this in it.

Got a good laugh out of this one!