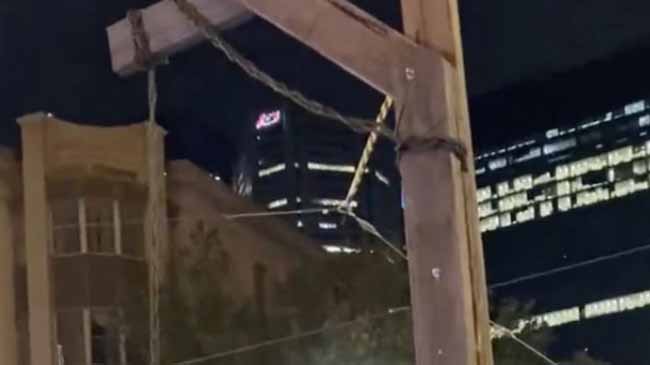 Melbourne protestors that brought nooses to last week’s protest have apologised for bringing nooses to the protest, and have made amends by bringing a more realistic one to the kill the bill protest outside Victorian parliament.

“This is a much better effort. This would easily hold a politician or a corporate journalist if Nuremburg 2.0 was completed today,’ a spokesman for the Eureka Stockade 2021 Association said.

“We’d like to thank all of those laid-off tradies and carpenters that were forced to get a jab to feed themselves and chose not to. Their skills have really come in handy here.”

Plans for a gallows to be erected permanently on Spring Street are being drawn up.

This bloke is on fire.

Good, so many people on social media are whinging about the gallows. None of the whingers see anything wrong with mandates and exclusion of the unvaccinated though, they have very selective ethics.

They can all hang.

I think the gallows are great, sends a clear message that the people are not happy, I am not sure why anyone would be against that. Dictator Dan has done such a shit job, not just the pandemic but his subversion to China and selling out state and country, I think that gallows would be a just and fair application of the law for a traitor of that magnitude.