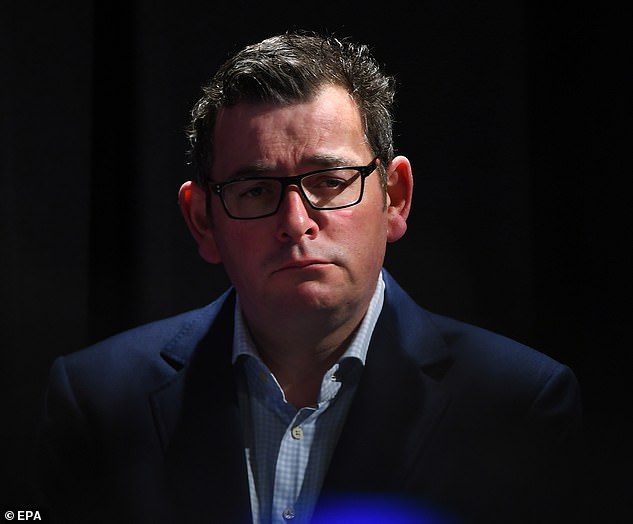 And so it begins…

“Daniel Andrews suggested on Sunday that going forward, life for the vaccinated would “be about the maintenance of your vaccination status”.

It’s truly bizarre to observe people who are actively pleased by this likely development.

Their reflexive opposition to anti-vaxxers is so great, and their newfound vaccine identity politics is so strong, and their disdain for anyone remotely more hesitant to perpetual coercive vaccination is so persistent, that they are genuinely GLEEFUL at the likely continuation of this new paradigm.

Dan is the first Aussie pollie that I think should have grave safety concerns if he continues to push so hard on so many fronts.

He has a Police detail 24/7. Only Premier in the country to have that unless McGowan and Gunner recently added that.

Someone will eventually have nothing left to lose and have a crack at him. With boosters starting the amount of people falling in the unvaxxed category and potential for conflict will massively escalate.

Oh, the little dictator has his very own little schultzstaffel / praetorian guard?

Yep. So does his family home in SE Melbourne apparently. Just amazing, most popular Premier ever.

AustraLithuania?
How else ya gonna manage 154 different languages in the EZ?

after seeing this article “depressing” is really ‘to put it mildly’.
I am now twice as happy I have escaped VIC 6yrs ago. For now

The number of stupid cunts lining up for jab number 3 absolutely does my head in!

I’ve got principles, man! And if you don’t like these, I have others!

can I have my dollar/permission to go to the park now?

The number of stupid cunts lining up for jab number 3 absolutely does my head in!

How did you assess that?

For inexplicable reasons I tend to have the view that as much as the response for the 3rd round of waxing will be fairly high it will be nowhere near as the questionable 90-sumtin % now and the 4th one will be taken only by hard core “it’s the science mate” dafties..
Perhaps because I view a lot of people that would otherwise never take the wax taking it just because they gave-in to preserve their jobs and the 4th round could make most borderline smarties jump the fence back to ‘informed consent’ side.

DictatorDavid
Author
Reply to  A fly in your ointment

I like your optimism but 90% of people have mortgages to pay and families to support. It will take a tipping point to see numbers dip and I highly doubt a 3rd booster will be it. 6mo – yearly boosters will be a thing now for the majority at least until state election.

Perhaps because my experience is that many are not buying it but succumb under pressure, for now…
There ought to be a round of boosters that will make majority begin to use brains. It has been made fashionable and trendy to be waxed. this has short lifespan.
Unwarranted optimism?
Glass half fool* personality disorder?
likely, I agree.

Perhaps because my experience is that many are not buying it but succumb under pressure, for now…

lets be realistic here. At least 50% of people begged for the jabs and then rushed out and grabbed them as soon as they could.

another 25% perhaps have dithered but were persuaded easily enough.

maybe another 20%(being generous) were pressured into it.

Say 5% are the hardcore holdouts who won’t be pressured into it (and will retire, change jobs, change countries)

There ought to be a round of boosters that will make majority begin to use brains.

it’s only some portion of the 20% who were pressured that might get cranky about boosters. Probably less than half of them.

It makes sense. once you’ve got that shit in your body twice (and haven’t died from it/had a severe reaction), to get it a third time is no big deal. And to start avoiding it after the second time would seem a vain exercise.

If the jabbed people do begin develop serious health issues en-masse, then the landscape could change, of course. But that’d not be a “civil rights” type change due to people “waking”. It’d be an “I don’t want to die” type change.

“I don’t want to die” is probably something they should have thought about before taking the first two shots, I think that it will become a cry in vain as their friends and family expire around them. Should this come to pass I am sure that there will be martial law imposed as I think that the masses will finally stir and start baying for blood.

If boosters are given, they will come with the same conditions as “double vaxxed”, you are never fully vaxxed and will become unclean again so the pressure will remain.

so can somebody help me clarify.

how long does this ‘vax’ last? is it an endless stream of boosters, or will booster 3 be the last one? will there be a point where the immunity will be long lived? what does the vax even do?

6 months given the data out of UK and Israel, so boosters every 6 months till your immune system is totally fcuked, then coved boosters and immune system boosters so big pharma can make more money

Brawndo, It’s got what plants crave.

I assume it does the same as the flu vaccine, or even the natural immune response to cold/flu and similar. It provides increased resistance for a limited time to the disease.
The only vaccines we have that are lifetime and essentially fully protective are ones that are for “childhood” diseases like measles and chickenpox that our immune system can already provide lifetime protection for after infection. All a vaccine does is trigger the bodies immune system without the illness itself.

Edit: To clarify, I highly doubt shot 3 will give any more protection that shot 2. But will quite possibly come with increasing risk of side effects.

Edit: To clarify, I highly doubt shot 3 will give any more protection that shot 2. But will quite possibly come with increasing risk of side effects.

so, how many shots do you think you need until your whole bloodstream is replaced with Pfizer-Proprietary-Porridge?

A fly in your ointment
Guest
Reply to  bjw678

I highly doubt shot 3 will give any more protection that shot 2.

Methinks it will.
Each shot will give you some protection from the variant-de-jour as it is laser precision targeting band aid, but unknown side effects can only add up with each shot…

scroll thorough pages on this link for the gist.

Another 6 months on top, which is what I meant or a year or longer after the shot?

You can’t compare this to any traditional vaccine let alone influenza. The covid vaccines aren’t traditional vaccines so there is unknown unknowns. The flu vaccine is essentially a prediction on the northern hemispheres flu season, they see what happens there and predict what to vaccinate against. There’s 4 flu strains and then subtypes. Then northern hemisphere does the vice-versa.

“In general, influenza vaccines are only effective if there is an antigenic match between vaccine strains and circulating strains.Additionally, most commercially available flu vaccines are manufactured by propagation of influenza viruses in embryonated chicken eggs, taking 6–8 months. Flu seasons are different in the northern and southern hemisphere, so the WHO meets twice a year, one for each hemisphere, to discuss which strains should be included in flu vaccines based on observation from HA inhibition assays”

Does the flu vaccine give protection against a particular strain for the rest of your life? If so why not just give everyone a shot for all variants once. They clearly have them ready to go for manufacture.
The guessing game is a result of the short term protection the flu vaccine offers.

The covid vaccines aren’t traditional vaccines so there is unknown unknowns.

They aren’t traditional in the sense they hijack your metabolic systems to create what your immune system reacts to, they are in that they still only enhance your bodies natural immune responses.

Peach why can’t we insert pics in comments anymore?

I don’t know – website seems a bit fucked for some people. Coming has that problem too 🙁

Sadly most of the commenters don’t. It is no longer about science not that it ever was, they just need a target to direct hate at. It has worked fantastically and distracted the masses from ever noticing the large wealth transfers.

They miss the point that it is the ignoring of natural immunity that is the issue not whether they are vaccinated or not.

Really the point is why is covid being treated different than flu, or even measles and chickenpox, or HIV.

It is treated differently because of who it effects ie boomers. The other diseases you listed do not effect boomers as much. Boomers and their wealth must be protected at all costs.

Bleat Van actually just made insufficient sense there.
If one is healthy, should one be banned from anything?
Can waxed become spreaders?

Bleat there only appeals to some science but grossly disregards another.

Bans are reserved for those questioning the site authors or making them look stupid(not hard a lot of the time), not for abusing other commenters.