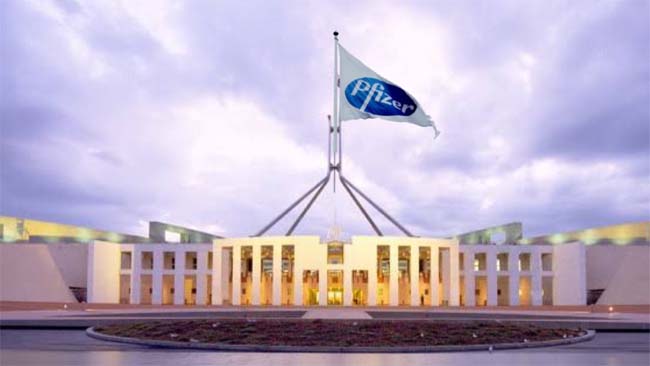 Pfizer has announced that it has won the naming rights to Parliament House in Canberra, as part of the contract signed by PM Scott Morrison.

Parliament House will now be known as ‘Pfizer House’ as the pharmaceutical giant looks to stamp it’s authority even further on EZFKA.

“This is a historic moment for Australia and a great testament to those who have supported the merger of state and corporate powers,” PM Scott Morrison said.

“I’d also like to announce that Question Time will now be brought to you by Pfizer.”

It is understood Pfizer is currently in a deal to acquire the Sydney Opera House, MCG and Ayers Rock as per the terms of the Agreement.

btw victoria is absolutely fucked, did anyone see the new bill dan is floating

it’ll give him unlimited power

Good, the sooner Victoria becomes an unliveable cesspit the better. Let all the people standing with Dan live in their own filth.

Some of us are stuck here.

To the barricades it is.

I am stuck here too unless the wife agrees to move.

Move to another state and buy yourself a few months before the same shit happens there.

My parents escaped this shit and it looks like I’ll have to break the generational curse and fight it because fuck living in it.

farewell those legazens who quit the state in disgust and replace them with a few hundred thousand compliant immigrants who will be thankful to live here, even if they have to be subject to medical experiments, etc.

btw victoria is absolutely fucked, did anyone see the new bill dan is floating

it’ll give him unlimited power

Beauty! Legal drugs. Or they remain illegal and Pfizer are still at the top of the pyramid.