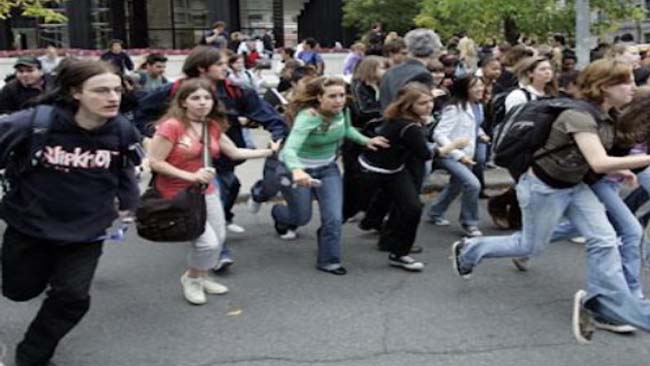 A huge wave of anxiety and panic attacks have broken out across EZFKA, after the Australian government failed to give instructions on what it’s citizens should do for a full five minutes.

Citizens broke out into panic and confusion, with many unable to breathe or put one foot in front of the other. Already overwhelmed hospitals were overwhelmed with injuries from those that fell over from forgetting how to walk.

Local man Davo, 45, said Melbourne was hit particularly hard with no Premier to lecture them on a state level.

“It was like was one of those zombie movies. People were freaking out that they didn’t have some fuckwit public servant lecturing them about what they could or couldn’t do,” Dave said.

“I apologise profusely for that and it won’t happen again,” PM Scott Morrison said.

Morrison said QR check-in procedures for breathing, drinking water and taking a shit would be fast tracked as a priority.

New record in the UK, well over 200 deaths. Cases out of control. They’ll be bringing back restrictions in November as I predicted months ago.

so you’re predicting that they’ll descend back into mask and lockdown bullshit for the winter?

It will start with limiting the number of people in venues then by the middle of winter it will be heavy restrictions and mask wearing.

On the other hand, given that this is going to be the second winter with the disease circulating, perhaps most of the vulnerable people have already succumbed?

Over time that will happen and is happening with successive waves everywhere, but I think it will take many years to reach this point where it burns out more or less.

It’s not as though 100% of people are guaranteed to be infected every winter, vaccinated people still catch the virus and are infectious.. The flu constantly circulates during winters but I’ve only ever had one. So the culling process might take a long time.

Even without vaccines this Christmas/New Year won’t be as deadly in UK as last year simply because there’s less dry tinder. Then again, people especially the vaccinated are incredibly selfish and destructive in their behaviour with no concern for who they infect. Much more so than last year when there was some caution.

They haven’t really hit winter yet in London, sunset still at 6pm, maximum temperature in the mid to high teens yet cases and deaths powering ahead.

I’ve been right since January 2020 every step of the way I think my run will continue.

A fly in your ointment
Guest
Reply to  Chinese Astroturfer

Then again, people especially the vaccinated are incredibly selfish and destructive in their behaviour with no concern for who they infect. Much more so than last year when there was some caution.

zactly what I said too.
The perception of invincibility and mutations due to leakiness

There are always more to succumb, from my experience in living in London there are plenty of un-healthy that are already only one session at Weatherspoons away from a heart attack / stroke or other disease, no vitamin D, no exercise and the fruit and veg there is devoid of vitamins as it has been cold stored for months, that’s even the waitrose “quality” stuff

They really are disgusting over there. A lot of people snicker at Americans for being unhealthy but there’s a robustness to many of their obese but still a fat unhealthy people.

Whereas the poms are these little people with these stick arms and big fucking guts on them from all their chip butties and curries, all washed down with copious amounts of bitters.

Lol go back to embee you fucking coward

uk defines any death within 28 days of a positive test as a “covid death”, regardless of the actual cause

hit by a bus after walking out of a testing centre ? If the test comes back positive , that’s a Covid death

given the virus is fucking endemic and they are still obsessively testing for it, it isn’t really surprising that there would be a lot of people dying (from various causes) after having returned a positive result

Tables are turning now you’re the one peddling conspiracy theories. I think this was the argument at the height of the initial hysteria.

It’s not a conspiracy theory you cretin

Maybe you might wonder why no one over there seems to give a shit anymore, just you and the cucks on MB

You got vaxxed for your boss. Loser.

So my mum was super sick last week, slept all week, said she had never felt worse. She dragged herself out for two Covid tests and both were negative.

It turns out it was just the good old-fashioned flu which had apparently died out but is now coming back stronger than ever. There’s now a massive vax push for influenza happening in Ontario, just layer upon layer of vaccines:

Yes the most likely outcome is a succession of mandatory vaccines and our natural immune systems won’t be able to cope with anything.

The worst part is that this will make every virus look super deadly and have the sheeple begging for everyone to continually get jabbed.

yeh, the real flu is actually pretty bad. Often a strong cold gets labelled “flu”, but it’s not the dawn thing.

as to the flu vax – I’m not sure that these days I’d trust the establishment not to sneak some COVID jab into the bottle on the sly….

Like the 3 kids in the US that went to a Wallgreens for a flu jab and got a adult dose of Moderna instead and promptly died.

Did that actually happen?

That’s not as bad. But it’s still pretty bad.

still, that’s an example of why not to take the “flu” jab lightly. Those who would administer the jab have in recent times aptly demonstrated one or more of incompetence/indifference/unscrupulousness