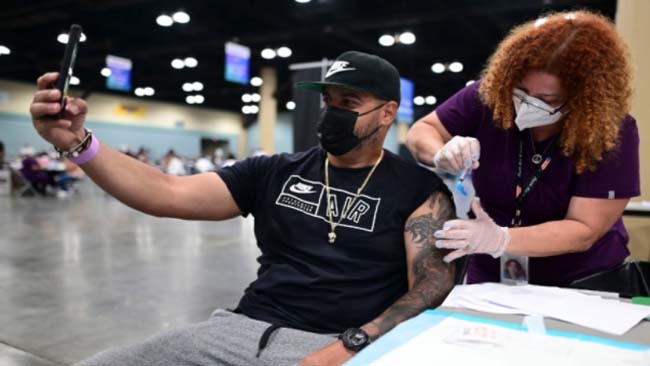 A new EZFKA poll has found that Australians who have taken the vaccine are now more insufferable wankers than vegans, crossfitters and cyclists.

The poll, conducted by the Institute for Tired of This Shit, found that recently vaccinated people were 99% more likely to be self-aggrandizing fuckwits than vegans or cyclists. Posting your vaccination selfie on social media and bragging over which pharmaceutical brand you have had, were found to be the most commonly insufferable traits.

“Never have we seen so many people needing peer validation for undergoing a medical procedure. Want to know if they’ve been vaccinated? Don’t worry, they’ll tell you,” Dr Nick Berenson said.

“Pretty pathetic, but given the level of self-esteem across Australia the data is not surprising. Probably the meekest, wussiest generation of people from boomers to zoomers that will sell any bit of hard-won freedom out for a morsel of comfort.”

The poll also found vaccinated Australians said apartheid on medical grounds was ok ‘as long as it didn’t directly impact them.’

A fly in the ointment

Waxed will become discriminated minority, oppressed by the 10%-ers of those whom ignore right for freedom for waxed

I’m always hanging out for latest survey findings from ITiTS!

I’m proud to say I’m vaxxed to the maxx. I collect them like kids collect Pokemon. Looking forward to getting the Sinovac and Sputnik V when the borders open. I’ll even get a little tattoo of their logo.
#VicCopsRtops
#hot4Dan

Just had a thought about the gain of function research being done in Whuhan lab on the Nipah virus that has a 60-80% fatality rate and 45 incubation period. What if the only way that they could get it to be transmissible in humans was to have a RNA carrier injected in the population first aka “the corona vaccines”.

Nah, that sort of 5D chess is beyond anyone. Besides, you’d need all the Corona vaccines to be identical in this respect, which they aren’t.

but this line of thinking is interesting to me from the following thought-experiment perspective: assume you’re right and in a few years the Nipah Kraken is released and takes out the Corona vaxed.

the only ones left would be:

what happens to the world then? Do the refuseniks go to war against the Illuminati, to take revenge?

what happens to the world then? Do the refuseniks go to war against the Illuminati, to take revenge?

with what? A collapse of population like that in a short period of time leaves virtually all production of everything stopping in very short order. The infrastructure of the modern world would simply not have the people and skills required to keep it operating.

That’s kind of what I’m getting at.

On one hand, if the Illuminati/bill gates/[insert other bogeyman here] kill off 90% of the serfs, they would seem to impoverish themselves by depriving themselves of slaves. They’d get to “rule” over a desert. Kind of a neo-Pax Romana: making a desert and calling it “peace”.

on the other hand, I catch myself thinking that perhaps the above is falling into the same trap that the residents of German forced labour camps got snared in – thinking “they wouldn’t kill their own workforce”… (similar thoughts come through in the Gulag Archipelago and writings about the atlantic slave trade)

on the third hand, there’d seem to be a large reservoir of unaffected people (eg in India and Africa). So perhaps we need to tweak the conspiracy theory from “killing off 90% of all plebs” to “killing off 90% of the plebs in western countries”. This tweaked CT has its own problems, along similar lines..

Think along the lines of Elysium but without the spacecraft

Let’s say you’re right – what’d all that be for?

just so that the elites & slave driver classes get to procreate and pass down their genetic information? To out-breed the others?

Yeah, nah. Not yet. Even the most basic stuff is still humans or machines controlled by skilled humans. They don’t pay miners stupid money to work in remote locations because they like to. And without even just that everything stops.

The difference is that the labor camps were a smallish part of the workforce that was easily replenished, at least early in the war.

This big problem is modern tech has built up over a long period of time and turning it off then on again may not be as easy as you think. Eg, the electricity grid in SA when it went down when the link to victoria got knocked out. The grid simply could not be restarted without a grid already in operation, since to bring a new generator online it syncs to the existing grid then starts feeding in power. The alternative is to break it up into small pieces and start a little bit by bit and spread outwards slowly but it isn’t designed to be done like that so it was no doubt quicker to wait for the link to victoria to be fixed to bring the power back on.

Imagine being this unhealthy at age 17 (probably a glandular problem lol) and then being surprised when you get sick:

Is that not just an infomercial to get the young ones to get vaxed, quote some obese, unhealthy person that has a bad experience with covid to scare them into getting vaxed. Probs was a actor like the “patients” on ch7’s hospital interviews a while back

Your attitude is totally heartless. Cant you see that even healthy two year olds can come down with horrible Covid complications?
https://www.news.com.au/lifestyle/health/health-problems/boy-2-suffers-collapsed-lung-collapse-after-catching-covid/news-story/767619b01ec11c1beaa557827d628707

Goes to show how piss weak the whuflu actually is, if it could not kill that kid that already had so many issues then I doubt it is much worse than the flu, a decent cold probably would end him!

When victims suffer from Stockholm syndrome

I guess Djokovic was not a celebrity enough earlier this year when he requested house quarantine with a tennis court for *all* tennis players in the lead up to AusOpen. I guess we don’t get to see him this year, as per Dick Dan, will it stop at Djoker and will this year’s AusOpen be a flop (perhaps a grub for less committed players like Kirgios et cie?)

The vaccinated and vegans will have one thing in common, in that no one will go to a restaurant with them

Except the vaxxed constantly post on Yammer and other social media sites, so no escaping them unless you give up social media.

so no escaping them unless you give up social media.

Do yourself a favour…

Gee not to sure if we would be able to hold Owers corner these days.

That does correlate with the data leaking out of the US too, as much as the doctors there are threatened with loosing their license to practice if they report vaccine deaths or side effects publicly the reports are coming thick and fast of under 30’s dying from heart issues and other side effects that could only come from the vaccines.

Surely it’s possible to fake severe symptoms like some kind of chronic fatigue after the injections. Maybe in lead up to blood work stop eating for a couple of days.

To what end? To get teh income protection insurance?

To avoid getting injections in perpetuity.

i reckon the first one is the worst. It’s the rubicon.