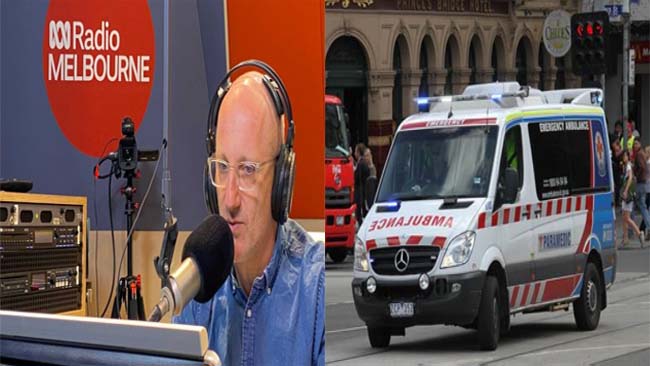 The radio journalist and Andrews’ sycophant was allegedly seen leaving the daily press conference in an ambulance, with a visibly distraught Andrews seeing the ambulance off.

“This is the third time this has happened and we think this is incredibly selfish behaviour at this time,” a spokesman for Royal Melbourne Hospital said.

“Jon Faine and Richard Wilmington have also had this happen to them at the press conference, so it’s really quite selfish behaviour during a pandemic.”

This is laughably fake news!
Mr Epstein wasn’t admitted to Royal Melbourne Hospital.
He was medevacked to Israel by private jet for rest and recreation.
He’s presently in a secure location with his distant relative Jeffrey Epstein – both are doing fine.
Reported!
#standwithDan #twoweekscurveflatten

I figure this is very melbourne centric…

This is a guy who has a nice cushy taxpayer funded radio gig who cuts off a guy living in his car for having the temerity to complain about the ABC using the phrase ‘we’re all in this together’.

The abc also seems to be struggling to work out why MSM journalists are being targeted by protestors
https://www.youtube.com/watch?v=sCkaRG1aLu0

He is the elite (deemed essential and had no detrimental financial impact due to Covid), why would he care about the plebs particularly the working class.