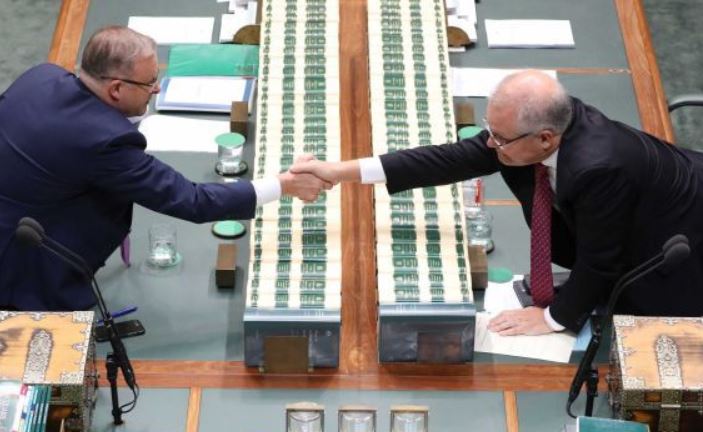 As we accelerate further down the line towards likely civil unrest in EZKA aka Prison Island, the ultimate question is when and where will it all end?

Without going too far down the rabbit hole, I notice many are holding out hope and are pointing to the upcoming federal election (scheduled for no later than May 2022) as a chance to ‘stick it to Scomo’ and get our country back.

My take is, they likely may not even allow that to happen.

(Disclaimer: I have no political affiliation and have equal disdain for the ALP, Coalition and the Greens and politicians to me are largely just salespeople for the AFR Top 20 Rich List. I also hope everything in this article is wrong.)

Think they won’t do it?

NSW council elections have already been suspended because of the lockdowns. And in Cucknadia, the country that is neck and neck with Australia for largest open-air prison, the federal election has been suspended indefinitely despite Trudeau claiming it will be held in October, until he suspends it again.

That being said, the federal election could well go ahead. My view is they want an ALP result as the ALP is the equivalent of Trudeau’s Liberal Party – globalism doing twice the speed limit. Open borders, wokeness, authoritarianism on steroids, etc. The LNP are globalism doing the speed limit and in my view aren’t moving fast enough for Klaus Schwab.

This is why we’ve seen the controlled demolition of the LNP since Turnbull (longer than that arguably but noticeably quicker in the past 5 years). Climate, borders, public spending, etc you name it, the LNP have moved so far to the left they are indistinguishable from the ALP on most issues, despite the non-stop cheerleading from the equally fake conservatives over at Sky News or The Spectator.

This is also the reason I think Gladys went about-face overnight and was finally done by the globalists – she wasn’t moving fast enough for them and they couldn’t have a local example of high cases and freedom which Australians could red pill on. Until now NSW during COVID (not on most other things) was the beacon, along with most of Queensland, of what little remaining freedoms there were in Australia. Victoria and WA have morphed into CCP outposts with highly docile and compliant dickheads fast tracking their states’ respective demise. But hey fuck freedoms, how about house prices and the iron ore price?

Ironically, the shit-tier normie take of Scomo “stuffing up the rollout” may be inadvertently saving lives. The FOMO marketing scam Pfizer have pulled off in this country is remarkably hilarious, bur it’s no wonder that Australians have fallen for it. given their attitude to the housing market. If Dr Robert Malone’s recent revelation about a ten-year media moratorium on vaccine side effects being made public in Israel is correct, then it’s little wonder Astra Zeneca is copping the brunt of the big pharma-financed media criticism down under. The Pfizer jab is equally, if not more, dangerous.

Realistically, you should stay away from it completely.

The longer the vaccine schmozzle drags on, the more people will see the increasing jab reactions such as ADE, Prion Disease and other side effects and the harder it becomes for them to sell. I’m now convinced that Delta is partly an attempted cover-up of the vaccine side effects and the hospitalised cases who are vaccinated are dying from the jab, or from immune systems so destroyed that conditions they’d normally have no issue with are doing them in.

Many of us know the jab is just a step on the way to vaccine passports and social credit scores/dystopian global surveillance nightmare. Again, if you haven’t read the Great Reset then go and watch a five-minute video on normietube as it’s unravelling before your eyes.

Back to the election.

What I think they are currently doing is continually trying to gauge the public sentiment to see if they will let it go ahead or not, for the desired result. I’m noticing more ‘polls’ saying a public preference for the ALP (lol) but as many of us realise, polls are used to influence public opinion and not gauge it – particularly since the fiasco of last year, they will not allow another Trump or Brexit to happen ever again.

Globalists really want an ALP result, because as aforementioned that means they can go full steam ahead with the Great Reset, as the fake workers party are more aligned with all of that nonsense, particularly on the climate front.

Again, I hope I’m wrong about all of it. I’d like to see more people politically awakened and involved, as we approach some kind of inevitable nexus point which can go a number of ways. I do think there is genuine fear now in the regime since the public protests a few weeks ago, and the corresponding level of propaganda and Police intimidation has definitely gone to 11. The numbers at the additional snap protest in Melbourne last week which caught the Police way off guard, I think has added to their fear.

How this ends, I do not know nor proclaim to – hope for the best, plan for the worst.

If your response to this hypothesis is something along the lines of ‘it’ll never happen’ or ‘they’ll never do it’ then as far as I’m concerned on the basis of what we’ve seen for the past 18 months, you can sit this one out. Consuming the copium of Amazon, AFL, Netflix and Uber Eats, while the rest of the country sinks into a Black Rock and Davos dystopia, is the more appropriate outlet for you.

I’m firmly of the belief that there currently is no political solution and the hostile ruling class will do everything they can to prevent a valid one from arising. Suspending the federal election will be a part of this. If they do suspend it, then I suspect a new strain (lol) will emerge justifying their decision. If it’s the Lambda strain then I’ll be praying Gordon Freeman gets called in to deal with the situation.

If an election was honestly held today, I’m of the opinion minor parties such as One Nation, Great Australian Party, Australia One, etc would receive a huge share of the vote resulting in hung parliament or minority government with an extended senate crossbench, but whether they could mount anything meaningful in terms of resistance would remain to be seen. And I would not rule out an attempt at election fraud at all, if the ruling class get really desperate.

That is, if we even make it to May 2022. The way things are going with hyperinflation creeping up, civil unrest growing and the supply chain having it’s nads firmly squeezed, an election might be the last thing on our minds.

dead bodies rotting on the streets

this is legitimate mental illness

Ronin8317MEMBER
August 10, 2021 at 2:42 pm
You can ‘let it rip’ when vaccination is at least 60%. Otherwise forget about the hospitals : everyone will infected and hope they don’t die. Dead bodies will rot on the street because without access of hospital, Delta will kill 1 in 10 who is unvaccinated. That is on top of all the people who can’t access the hospital because it’s clogged with COVID patients.

LOL 1 in 10, what planet does this fool live on

a 1 in 10 deadly virus would ACTUALLY justify hardcore lockdowns, that would have a devastating impact on society.

if covid really was as deadly as everyone says, that’d still all be true.

current Covid outbreak in NSW has a CFR 0.5%, but your have to think no one in the southwest is dumb enough to get tested unless forced to and the real number is 0.05 or 0.005%

gold standard Victoria has a CFR of 4.0% lmao one of the worst in the entire world because chairman Dan decided to send infected nursing home patients back to their homes

he’s the MB hero though

the plague was actually a pretty good thing, wiped out so many people it broke the backs of the medieval lords and the feudal power structure and allowed the formation of a burgeoning, well compensated middle class.

covid could have been our bubonic plague, wipe out the oldies and deliver housing to the people.

this is largely historically accurate, I believe.

but people kept on keeping on, even without modern medicine.

i do concede it probably wasn’t fun though 🙂

Ronin is one of the biggest hypochondriacs on there too. I think he is a chong from memory and a bit sensitive to criticisms of China.

IT seems to becoming almost like a hive mind now.
Read a comment or two and then don’t bother with the rest.
I expect the whole place will be gone soon.

Honestly share a lot of the sentiments. I think a cancellation is possible.

Anyone else noticed the sudden pivot to climate change and UBI in the press? I wonder if they ran the algorithms and have shown that the resistance to this whole thing is now too large to work for them, so they’re moving on/escalating?

Just a thought. Trying not to sound like bcnich but I’m convinced something major is due in the next month or so. Biden mandating vaccines for the US military may be the tipping point.

The thing with the military jabs is that it’s important not to make the mistake of interpreting it as “Well, the US values it’s military, so if the jabs weren’t safe, they woudlnt be pushing them out to their military”.

a more sober interpretation involves recognising that ….errr… basically part of those military dudes’ job descriptions is to die when required.

and for any military mission there is an acceptable casualty rate (casualty includes both dead & wounded).

So, the brass has just made the decision that the casualty rate will be acceptable. Who knows what their hurdle rate was….

I don’t think the government has the guts to do this HK style election cancellation, oops I mean delay. But I’ve been completely blind-sided by the compliance of the public to all sorts of things that we all thought would never have passed muster.

Anyway, lets think this through, based on the experience of the past 18 months.

Pretty easy to see it happening. I would guess that the public and media would put a stop to it early in the process… but like I said, I thought the public wouldn’t stand for lockdowns in August 2021 (let alone March 2020).

Again, if you haven’t read the Great Reset then go and watch a five-minute video on normietube as it’s unravelling before your eyes

Another one is woken from the sheeple, that is the first step there is so much more that is hidden by big tech and fake news MSM. Welcome to the red pill.