Caught this article by Leith this morning on the Grattan Institute,  “Gridlock: Removing barriers to policy reform”, which argues that Australia’s prosperity is at risk from a decade-plus of decay across our political institutions.

Leith as well as the Grattan Institute make the mistake of only looking at the first derivative of our social decay, the Corruption, they don’t see that it is being brought about by the second derivative, the thing that is accelerating our social decay – Diversity.

The point of MultiCult is to destroy enough commonality a society may have, so that any ability to self organise in order to ‘solve the economic problem’ like public welfare, is destroyed, and instead ‘the solution’ gets passed to the private sector to solve – for a profit.

This IS the Foundational stone upon what all of society is built on, it is societies purpose – to solve the economic problem.

Yet thanks to the ethno narcissism of our new elite who see expectations to integrate and assimilate into the existing community as a form of cultural genocide, for the last 30 to 40 years we have instead had ever increasing levels of diversity forced upon EVERY aspect of our society.

This has been done not to make it better for the people living there, but to increase the power of our elites and make them feel safer from ever having to face the possible retribution of the masses for the evil they inflict on us. Divide & Conqueror has been used for centuries, from the English transplanting a tribe of unruly Scots to Northern Island, to the Biblical Tower of Babel and beyond:

“But Sennacherib, king of Assyria, had already come, and through his policy of forced population transfer he had scrambled all the nations of the lands, as it is stated in reference to Sennacherib: “And I have removed the bounds of the peoples, and have robbed their treasures” .“

All that diversity achieves is a lack of agreement on basic cultural principals, it becomes increasingly impossible to collectively agree on any common solution to the economic problem, and instead the economic problem is handed over to the private sector to solve – for profit. That’s the standard technique of privatization and soft corruption: diversify the population’s opinion base, they can’t agree, things won’t work, people get angry, you hand it over to private capital.

Corruption is merely a manifestation of this lack of community agreement – when something needs to be done, and you cannot get agreement based on social or cultural values, there is always the chance that you can get agreement on individual values i.e. corruption.

MultiCult lays the groundwork for the process that Chomsky merely observed, and it is the true source of Australia’s rising corruption and political malaise.

I appreciate the sentiments but I think it’s a bit of a long bow to suggest multiculturalism instead of simple old fashioned corruption is a driver of outsourcing.

I’m not blaming MultiCult for corruption, what I am saying is that even in a more homogenous society, the process by which it can come to a common agreement on how to solve the economic problem is at best like ‘herding cats’.

The point of MultiCult is to increase the diversity of thought in a society to such a point that this becomes impossible and that it is instead handed over to the private sector to solve.

Corruption will always exist, but the total surrender to the markets and the sort of Soft Corruption that Grattan and even Leith was lamenting, is the inevitable result in passing all solutions to the economic problem, over to the market.

Such a state can only exist in a society or economic zone where the ability to come to a common agreement on common social problems has been destroyed.

Diversity is the pre-requisite to rule by market.

I think that this is a clearer exposition, Stew.

Even if you don’t want to blame multicult for corruption maybe it would help though if we stopped importing massive amounts of people primarily from two countries (Chindia) that are ranked on the Corruption Perception Index between fair play luminaries like Benin, Guyana, Lesotho, Burkina Faso, Morocco, Timor-Leste and Turkey.

As an aside Australia is ranked at spot 11 (closer to number one is less corrupt) together with UK, Canada and Hong Kong, so not sure how much value this, probably politicised, index has. 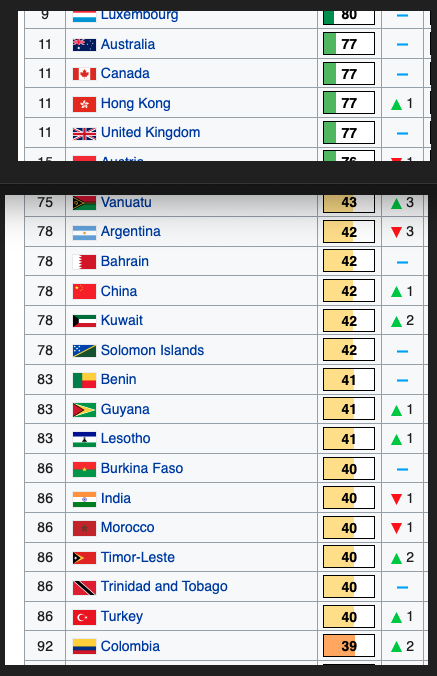 You’ll notice it is corruption perceptions index.
Low level corruption like having to bribe a police officer, border guard or public official as an individual results in high perception of corruption.
Large scale institutional and political corruption is much less visible to the everyman.

One could argue we are just as corrupt, but our corruption is far more sophisticated.

You’ll notice, if you had bothered to look at the link, that the ‘perception’ is not formed by the ‘everyman’ but these institutions:

So why is the word perception used?
It has a very clear meaning.

Corruption also has a very clear meaning, but it’s very hard to prove as a crime. Any case that ends up in court is, like most crimes, the tip of the iceberg. If you have the right connections in corrupt countries you’ll be ok.

As beast says it’s not just money moving hands but also cushy boardroom jobs after public service, impossible to prove as being corruption. Hence the ‘perception’.

Again, do I think the index somewhat politicised? Yes.
Because for the only known ‘Western’ Banana Republic Australia to end up at number 11 is laughable.

Australia gets to number 11 as it is a relative measure. Yes, we are a banana republic, but our corruption levels are a lot less than other countries. Boardroom jobs after public service seems to be pretty universal and if it is not the boardroom, it is a key executive appointment.

Sure, anyone that has done any traveling in LatAm, African and Asian countries knows that corruption in most of those countries is rife, and quite out in the open.

Coming from Northern Europe I’m just not used to the Australian level of corruption. The scale reminds me of Southern European countries like Spain, Italy, Greece.

I am not arguing there is no corruption, it is not as embedded in all parts of society like many countries. I am actually surprised how high up the list China and India are. Agree Australia is probably worse than Northern Europe, but it is heading the wrong way. But Australia being at 11 is not that surprising for me. We actually used to be higher up.

When did it start to go the wrong way, or for what reason(s)?

Honest question, as I haven’t been here all that long.

neoliberalism and privatisation made it a whole lot easier for that sort of corruption to happen.
When vast mounts of essential services were government owned without profit incentives, there is no incentive for the public servants running them to do anything other than provide a reasonable service.

Essential services and government regulated monopolies are where they potential really exists for corruption.

And i’d like to say it started in the 90’s but realistically that is as far back as my personal observations reliably go so it could easily be earlier.

The corruption you mention is a worldwide issue, and I am sorry to say is getting worse in Northern Europe also.

I have also sensed since the GFC there seems to be an urgency for the people in authority to fill their pockets as fast as they can. Almost as if they know the gravy train is going to end soon and they want to get as much of the loot as possible before it does. Or maybe everybody is just getting more greedy.

Our leaders should be moral and ethical in their behaviour and when they start exhibiting degenerate behaviour the peasants see it as an excuse for them to do the same. It’s all downhill from there.

Also, apologies for calling Australia a Banana Republic. It was hyperbole but with a kernel of truth, in my opinion.

I love Australia and the Aussies. You are so polite and a very nice people with a big heart. Maybe even too polite and nice since your country is taken away from you without much of a peep.

Australia could do so much better for itself and the Aussies.

If I didn’t care about this country I wouldn’t give a toss.

i think culturally alien groups who move to australia ultimately ‘integrate’ to some degree over time (across generations), even without the expectation of needing to do so, for one major reason:

sorry, but it’s true; white women are the most desirable women on the planet (even if so many of them are fat now) and minority men are CHOMPING AT THE BIT TO PLANT ONE IN WHITE BITCHES, even if its futile bc white women will almost always never date them. to all other races there is nothing more prestiguous than bringing a white ho home, this is nothing that will ever change this fact. multicult or not, second gen will always move away from speaking their native languages and even start rejecting their native religions if they believe it will give them a greater chance of landing some hot tight white poon.

the real question here is: why are we letting them do this.

IDGAF about ‘australian culture’, i want to preserve white women. hundreds of thousands of years of sexual selection and evolution is more important and valuable than some kitschy garbage about bbqs and holden commodores ever could be.

Hmmm! Wikipedia suggests you may be onto something:

A 2015 study of interracial online dating amongst multiple European countries, analyzing the dating preferences of Europeans, Arabs, Africans, Asians and Hispanics, found that in aggregate all races ranked Europeans as most preferred, followed by Hispanics and Asians as intermediately preferable, with Africans and Arabs the least preferred.

IDGAF about ‘australian culture’, i want to preserve white women.

how many would you like to preserve? The lot of them, or just a few for yourself and your mates?

Yeah but not sure what it has to do with Soft Corruption…. also from what I understand it is actually ‘White Men’ who are the most desirable.

That is why so much effort is going in to our current society and media to try and portray white men as low class or as a low value mate. Just check out the media ads collected by ‘White Men Are Stupid in Commercials’.

There maybe some correlation between the two, but maybe not causation. Most likely our elite have founds ways to be corrupt and distract people in the process. Additionally there is a tendency these days to outsource work and decision making to cover backsides and to blur the lines of accountability. There is also an added bonus of a post politics career.