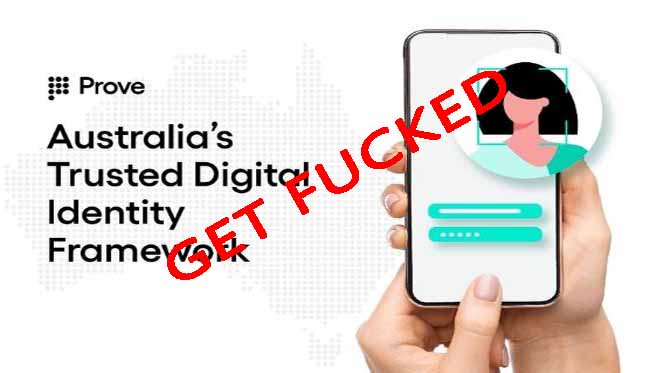 There’s been a lot of talk from the WEF and co recently about the Digital Identity program, which is currently floating around in the background at Australia Post and Digital Passenger Cards for entering the country. In my view, vaccine passports were purely a trial run for this technology and the only reason vaccine passports are being dropped – the infrastructure for digital identity and central bank digital currencies is ready to go.

The aptly named “Trusted Digital Identity Bill” is still sitting in parliament and has been introduced by the most untrustworthy criminal psychopaths in Australia.

It’s currently in the “mandatory but not mandatory” stage. I’d expect the first attempt at a mandatory Digital Identity to come in straight after the Australian election this weekend, that’s what happened in France post-election and we’re aren’t far behind them. It won’t matter who wins the election but I’d suspect the ALP states will go first, likely Victoria.

Ex-Pfizer executive Dr Mike Yeadon, who has had a pretty good strike rate so far, was on a podcast recently talking about the contrived food supply/supply chain attack as the next stage of the Great Reset. All of this is completely deliberate and I completely agree (see the baby formula scenario in the US at them oment).

There’s been a lot reported on the fires at food processing plants across the United States in the past 12 months and these point to all being mostly deliberate. China’s current hold-up in the Shanghai freight terminal is in another branch of that arm. Throw in billionaires like Bill Gates buying up farmland and investing in artificial breast milk and there you go.

In terms of EZFKA, Australia’s issue is that while we grow plenty of food, getting it to the cities is the main issue and our lack of oil refinery capability is the main problem. We also don’t produce that much fertiliser and rely on imports because we’re geniuses and “don’t do that here” mate.

Yeadon’s main thesis is that they will attempt to reduce the amount of food in circulation until rationing becomes a regular thing – if you thought the toilet paper punch-ons were bad wait until food is really in shortage. They will then say that in order to accept x amount of calories you must have a Digital Identity that can track just how much of you have eaten in the past few weeks because ‘fairness’. I would suspect meat and dairy is hit list item number one and Mike Cannon-Brooks will step in with his cricket flour investments.

Throw in a rate rise and/or inflation in the US and things will accelerate on this front.

None of this will apply to the WEF stooges of course. This would also explain why Daniel Andrews new agriculture ‘kulak’ legislation gives unfettered powers for the government to literally seize farms, to go after primary producers and destroy crops – this will definitely be abused for this end.

Digital Identity must be rejected at all costs as the door will be wide open to a corporate social credit system from then on outwards. The usual apologists will be out in the next few weeks and saying “it’s just a digital identity’ as they were previously when they were saying ‘it’s just a jab, it’s just two more weeks of lockdown, etc’.

Given the amount of Aussies that lined up for jabs, shut their businesses down and are still wearing masks, I think we could be in trouble.

Australia is the testing ground for the WEF after all.

As long as house prices double every 7 years no one will care !

If Daniel Andrews kulak legislation works like previous one in the ‘20s, then house price increases may be further down the priority list. Probably by that stage though, we’ll all be forced into kommunalkas.

apparently it may become illegal to grow own crops, or veggies or fruits…

to help push people into apartments!

LOL, probably.
making own fertiliser will become illegal and officers of the law may enter at free will ti see if your back yard is full of bovine shit, aka manure. Aha, caught with a hand in the cookie jar, for collecting shit to use it as a fertiliser.

More likely the government will say you can only grow such and such on your property. It will be illegal to grow anything else. History certain repeats.

that would not be so bad if they said “grow Mary and Jane” or even allowing a certain precious variety of mushrooms but it looks as another way to prevent and limit self-sustaining in due time then when ripejust blame it on the existing law….

LSWCHP
Reply to  A fly in your ointment

I had a look at this and couldn’t see the bit that would make it illegal to grow your own fruit and veges.

Knowing what I know about IT and Payment systems I can confidently say that it would take many years to implement a CBDC that tracks all your payments. If they started today I would be very surprised if they had it working before 2030.

Last edited 6 months ago by Freddy
0

certainly as far as cbdc of a kind that government could substantially program and control goes – this would be multiple years away. I mean it takes years to bring in a “smart” bus ticket system, for gods sake.

as to digital identity, I think they could definitely do that much more easily. Still take years until it would pervade everything, but they could have something up and running as a foot in the door within 12 months.

Pretty sure this is already up and running in china, with ali-pay being the backbone of the system.

What sort of capability do they have through the system in China?

can they trace private transactions? Can they control balances (freeze, earmark, make then expire)?

Being a government project if you want an accurate estimate of the time/cost just double whatever they claim.

They’ve already implemented a cashless welfare card which incorporates elements of what you would see in a CBDC so it wouldn’t surprise me if they use welfare recipients as guinea pigs initially followed by a wider rollout. It would give them time to iron out the inevitable bugs and wouldn’t get much push back from the MSM consuming normies.

Read up about NPP payments. It is pissy and low risk (other payment types to fall back on if NPP was to have a serious outage). It uses an existing payment standard (ISO 20022), and it took them 6 years to take it to a pilot stage.

Onto CBDC. To get it to the stage of monitoring every single payment, then you are talking about every domestic payment system being replaced, every POS machine upgraded to provide relevant details, ditto credit/debit cards etc. It is minimum 10 years project. I would put it closer to 15 years before they can actually implement it to the level of population control.

But I do agree they can achieve a similar outcome in much quicker time with reporting changes to existing payment systems. Just need to make TFN mandatory for all accounts linked to electronic payment methods, report all payments to govt depts, ban cash, add some capability to blacklist TFNs, and we are there. But OP was specifically talking about CBDC.

Last edited 6 months ago by Freddy
0

They would also have to shutdown other loopholes such as locals obtaining overseas credit cards.

A fly in your ointment
Reply to  Freddy

systems will be merged.
CC issuers from induced foes will be banned, the rest is part of the same realm already

I’ll respond to a couple of comments here.

Good point on the “smart” bus ticket system. Also, on CBDC system, and Max Payne’s comment on cashless welfare card – yes, it has been implemented and it’s use excludes certain purchases (alcohol, smokes) – this is already being abused – a store owner will allow a welfare card user “buy” a certain amount of “approved” product in exchange for an “unapproved” product, with a discount favouring the store owner, who then gets to on-sell the previously “sold” product again.

Once you roll that out to a wider society that does not rely on welfare to survive, but lives on the fruits of their labour, how will you limit/track them? It will immediately create a huge black market, where people will trade things for things. Or say, buy some silver/gold/whatever, trade it, the recepient sells it back to the dealer. All legit.

On digital identity, I remember reading that digital cameras / surveilance cameras can be fooled by wearing a hat with a pattern – it scrambles them. People putting stickers on street signs, so Teslas etc cannot recognise them because of patterns. Sunnies / hats / hoodies.

And then what happens in case of a power failure? Cyclone up north end? Or transformer being blown by a fallen tree or a disgruntled citizen? Life stops then?

Technology has its limits, I personally lived through a couple of hurricanes and learned right quick to have cash, cause ATMs and credit cards didn’t quite work. It is in those situations people are most vulnerable, because their life has been turned upside down. I am not saying go full retard with cans of beans, but like plenty of people in NZ, have a grab bag and be ready to leave house if an earthquake strikes.

Idahobit is a great and wonderful thing.

I wonder when they will start celebrating IDAP(ureblood)?

Last edited 6 months ago by Peachy
0

A fly in your ointment
Reply to  canuckdownunder

LOL, i had to duckduckgo it.
Good for pips with -phobia but it is unjust as it excludes people with heterophobia, fat travesties (aka transfatties) and does not cover “deniers”, you know ungayed, untrannies, unqeered, unthis and unthat.
science et cie

spell checker and bad glasses. but perhaps it is a providence, why not both?

Why are there only 49 contestants in Miss black USA pageant?