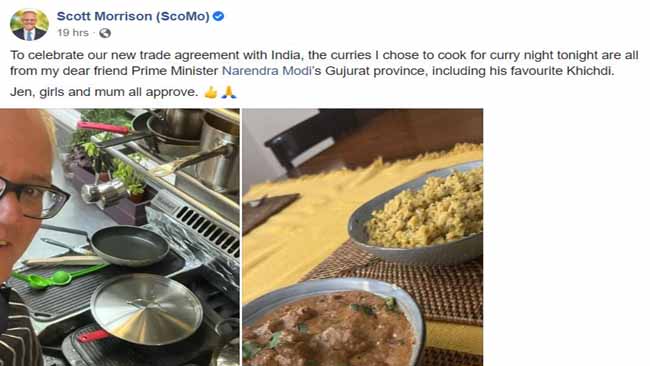 Prime Minister Scott Morrison has celebrated the signing of the Indian Free Trade Agreement by cooking a curry on social media last night and praising Modhi.

The Indian FTA, which was signed last week, has been lauded as the coup de gras for Australian workers and the PM wasted no time celebrating his joy in throwing millions more Australians to the foreign labour wolves.

“How good is a curry and offshoring an Australian job to India? It only tastes better when you’re bringing Indians onshore to take Australian jobs,” Morrison said in a Facebook post.

“One thing that migrants bring other than the huge social costs which are never mentioned is the food. I mean, we could just look up their recipes online without importing them, but we know white people can’t cook anything other steak and potatoes.”

“Prepare yourself for a migrant tsunami!”

Meanwhile, PM hopeful Anthony Albanese has countered Scomo with a video of him preparing a Beef Vindaloo and vowing to ‘import more Indians than we did under Rudd with student visas.’

The working class are the merely the first to be sold. In a generation or two the Indians will play a big role governing us like they are in the US and the UK. Then again, one Abul Rivzi had a big part in getting them here.

It will be great!

If you are white working class, your future is pretty bleak.

If you are white and skilled, probably best to determine which country you’ll move to.

Not satire, a deal already done to get yoga instructors and chefs in from India.

Aren’t many of the “yoga instructors” and similar gurus out there actually cult leaders with freaky rituals and abusive customs?

I am pretty sure I’ve read all about it.

“Mobility was one of the key outcomes of this agreement” 🤔

I guess better outcomes for Australian citizens is not a key metric. Given the number of coalition MPs who will lose their seats, there was haste signing the agreement. They will get post political corporate gigs from this while the working class will once again get shafted.

I hope they bring in the Kama-Sutra specialists… I mean they will bring the coolie curries no matter what, at least this profession is in short supply for decades