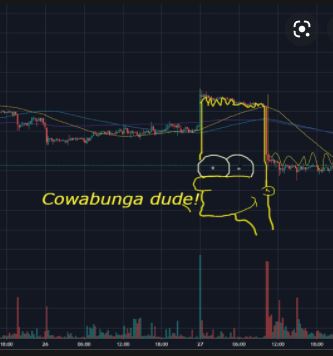 After reading up on the fascinating price moves of Nickle on T’s Nickle post the other day, it reminded me of a trading phenonium observed fairly frequently within the crypto world – the Bartman!

The above images taken this morning when I began typing this out Sat, 12 March 12:18pm.

It is functionally a basic structure of the crypto market, long periods of sideways trading in thin liquidity, followed by sharp upward or downward spikes, triggered by cascading stops. This is one of the main ways that unregulated exchanges make all their money when they trade against their customers:

Anyhow, came across an interesting court case on just this phenonium Razvan vs BitMEX (and associated parties).

As well as alleging the same basic allegations of trading against their customers, this particular case is interesting as it introduces the spicy element of money laundering into the equation.

The gist of the case is this:

“A money launderer (Defendant) would open two exchange accounts – a helper account on one or more exchanges used by BitMEX to calculate its index price (Coinbase Pro, Kraken and BitStamp) and a winner account on BitMEX.

The money launderer would then enter into a large leveraged derivatives position on BitMEX and immediately execute market orders from the helper account with maximum slippage to move the index price in a favorable direction (Ex. 2, 3, 7).

Due to disparity in liquidity between BitMEX and the spot exchanges, the aforesaid deliberate design of the index price by Defendants, and the cascading liquidations of leveraged trader positions on BitMEX, the amount spent from the helper account is multiplied greatly and translates into outsized profit in the winner account on BitMEX, Ex. 2, 3, 7.

The described money laundering and other nefarious acts are well documented and take place on BitMEX almost daily, Ex. 2, 3, 7. Moreover, to exacerbate the described price manipulations, BitMEX intentionally locks users out of their accounts during manipulation times, falsely telling the users that their “system is overloaded”. “

Anyhow, probably not as exciting or as topically interesting as Nickel momentarily topping $100,000 a ton, and the LME cancelling orders and trades, but a good example of the sort of manipulation and corruption that is very common in the crypto trading space.

Yes the whole marketplace is entirely a fraud

and yet also completely unregulated

why would it NOT be entirely fraudulent ?

Money laundering is problematic, but more problematic is rigourous enforcement of everything. If there is no crime, or if every crime is solved, then there is no freedom. The internet and the massive amounts of data being collected are providing unprecedented opportunities for better enforcement. Changing the quality of the enforcement actually changes the nature of the law. I for one draw great comfort that there is a functioning money laundering market that is fairly safe and easy to access. While you wouldn’t want it to be a serious threat to the regular financial system most of the time, you never know when you might need it.