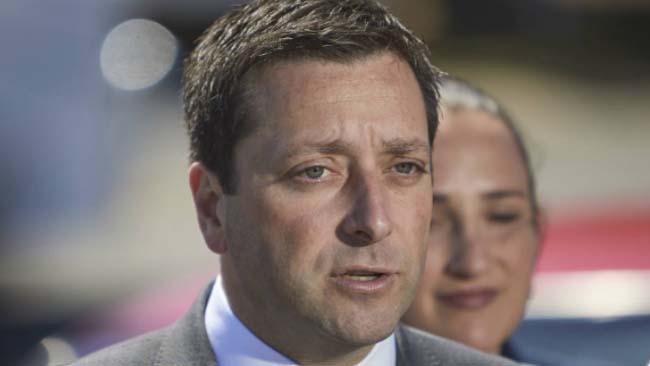 Victorian Liberal Party leader Matthew Guy says he’s open to selling out on permanent pandemic legislation, if Victorian crossbenchers are unwilling to do so.

After winning the Controlled Opposition of the Year Award, Guy said he’s more than prepared to sell out the Victorian public and has a proven track record of doing so, as the Andrews government struggles to find a deciding vote.

“Victoria is the frontline of the Great Reset rollout and we have to honour the terms of the uniparty agreement, in offering only a token difference and then supporting it a few weeks later,” Guy said.

“I’ll make some feigned indignation speech in parliament which the LNP boomers on Twitter will eat up, and then I’ll just stab in the back as usual.”

The vote will be decided on next week, after Guy has finished blokcing the last of his voters on Twitter.

It was either going to be Matthew Guy or Ess Aye Pee allowing the legislation go through. Both are useless. But the LNP MPs are pretty much unemployable outside of their party.
I am hoping the bill won’t go through, but I am sure someone will sell out.

Labor are also unemployable that’s why they get cushy Union or superannuation jobs. Don’t forget the jobs bought by the taxpayers on toll roads, desal plant etc etc.
You get my drift.

Absolutely, get your drift, but I doubt any of the LNP politicians could even get a job outside politics. They most probably would get a lobbyist role.
Union leaders and superannuation management roles are roles for the privileged few. Yet they can not understand why the working class have abandoned them.
I have noticed that most big projects in Victoria are PPPs that have no benefits to taxpayers, but are a wealth transfer to industry superannuation funds where former Labor politicians sit on lucrative post politics roles.

Matt Guy is phenomenally useless. My guess is he has been given assurances from on high he will be looked after.

This is scummos doing for my money. Or whoever has videos of scummo doing dodgy shite.

Hilarious that they thought bringing back the last guy to lose an election for them would be a winner.

This is exactly what will happen. Looking forward to MBs explanation if SAP sellout.

Peachy was spot on about what would happen:
https://www.ezfka.com/2021/11/20/jussie-smollett-tweets-support-for-andy-meddick/#comment-15533

Yep spot on. SAP permanently kill their brand much to the delight of the property lobby.

The media aren’t releasing any details about the driver in Wisconsin, so that means it’s a white guy?

Wrong it is a black guy with a record as long as your arm is out on bail. Try again

I am pretty sure he was being sarcastic 🙂

Yep definitely not a repeat offender that had a rap sheet as long as my arm, that was out on bail after having been arrested for jumping bail for a previous offence, had also not been let off by a democrat Soros appointed BLM supporting DA / prosecution.

I believe the proper term is jogger.