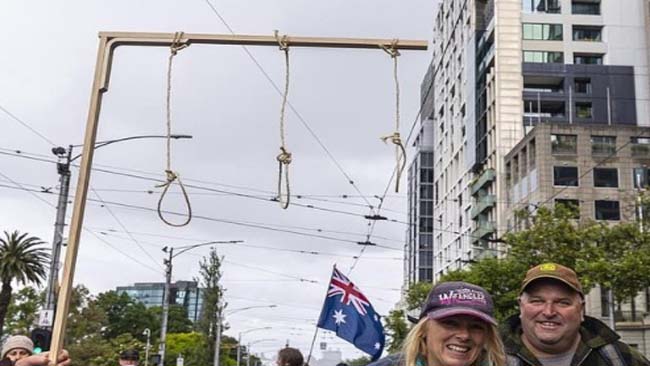 Protestors attending a rally against Daniel Andrews and the proposed permanent pandemic legislation, have been slammed for bringing gallows that only had three nooses.

Critics have panned the move as being ‘grossly inadequate and disproportionate to the human rights violations and economic destruction of the past 18 months.’

“It was clear that this was unacceptable. Only three nooses? That’s barely enough for Dan, Brett and Jerome after Nuremburg 2.0,” a spokesman for Eureka Stockade 2021 Organisation said.

“Plenty of journos and bureaucrats that deserve the rope as well for all the suffering and death they’ve inflicted the past 18 months. We’re going to need bigger gallows.”

Protestors have vowed to bring a guillotine and are believed to be sourcing a wall for a firing squad, once treason trials across Australia are completed.

What!!!!! They were not telling the truth, I’m shocked.

LOL need to re-enforce those gallows as well

I think they would all fit in a SpaceX rocket!

Kids as young as 5 will be forced to participate fizzler clinical trial.
I could be wrong, from memory I read that from the terrible flu their chances are 2 in million, from jabberwocky it is 40 in million. That is the chances of dropping the spoon for good.

It is one thing testing on animals and adults, testing on kids with something no one has a clue what the long term effects are apart “Experts say…” and “it should be safe” is totally different.
Time to see the cost of one way tickets and asylum friendly countries.

this is – genuinely – one of the most tucked up stupid things I’ve read in the last few months.

She said children were more likely to be “distressed” by the invasive testing process, and should the test come back negative there were a range of triggers that could set off anxiety, stress, and depression.

“After the initial shock and confusion of receiving a positive diagnosis… There is an extraordinary amount of guilt,” she said.

I mean, you can’t seriously be this fucken stupid, can you?

Never mind the comment on news dot article, it is rubbish no matter how you look at it. “Experts say…”, it begins, which is a dead giveaway.
What matters is that the talk has begun to be louder and brainwash is now in full swing and no later than 3-6 months from now we’ll have a false flag event e.g. a school superpsreader event.