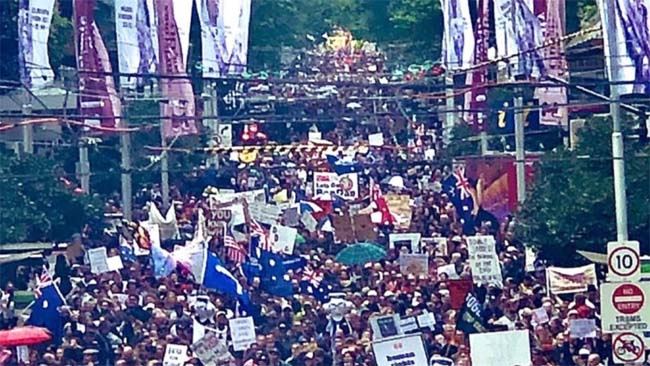 Large protests in Melbourne have happened for the third straight week in a row, with experts on ABC News calling for more communism to put it down.

After a record number of protestors braved the cold weather to object to the pandemic legislation, experts from the Everything That’s Not Left Is Far Right Institute said on the ABC that the far right have taken over Victoria by stealth and that drastic measures were needed.

This also marked the first time the ABC have actually covered the protest.

‘It’s clear that the far-right, anti-vax nutjobs have infiltrated and taken over the state of Victoria and emergency laws are needed to put this down,’ Dr Bo L. Shaveek told Virginia Trioli.

‘This is going to get worse particularly after the 4th jab. It’s time we really start putting people in camps for their safety.’

Scott Morrison has stated he will not directly intervene unless it’s to supply ADF troops to Premier Daniel Andrews to put down any civil unrest.

Good to see. We all need to let our lords and master know that they’re our servants, not our rulers.

FYI here’s the link. They didn’t mention far right. It was factual and to the point (surprisingly).

Wow there’s a first for the ABC. Got through the sub editors somehow.

Correct all ABC talked about was fear mongering case numbers and mandates pretending that they are laws. Enemy of the people.

Was surprised they didn’t use the usual trick of vastly understating the size of the crowd. The MSM did try to ‘poison the well’ though by making reference to QAnon.

Fuck the abc,go to hell you pac of cunts.

Smith is a bundle of sticks
Guest

ABC is at it again,
‘Vaccine mandates and lockdowns have become the ‘Trojan Horse’ of New Zealand’s far right’https://www.abc.net.au/news/2021-11-15/new-zealand-tough-vaccine-mandates-provoke-violence/100602078