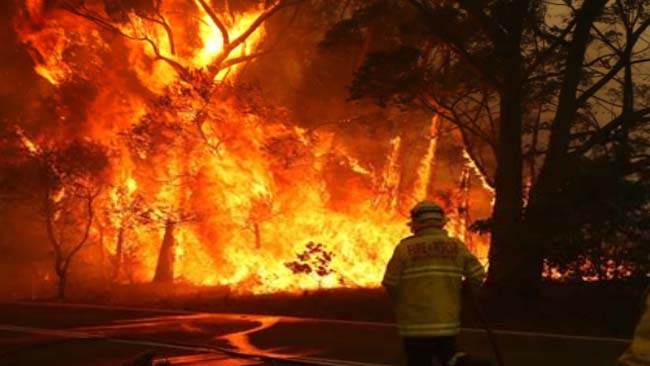 Journalists from the EZFKA mainstream media are all set for another summer onslaught of climate change propaganda, as the nation’s annual bushfire season kicks off today.

Stenographers from the ABC to Channel Ten are all set to blame the annual bushfire season on CO2 emissions and ready to call repeatedly for economic suicide of the Australian economy.

“We’re all set for another summer of blaming the federal government on state issues,” a spokesman from the Sydney Morning Herald.

“The COP26 summit couldn’t be better timed as a lead-in to summer. Confronting China and India over pollution is quite clearly racist, so soft-target yellow journalism it is.”

Fcuk Chyna, till they do something about emissions then there is no point in anyone else doing anything otherwise all we do is push more manufacturing their way and destroy our own independence (what little is left)

Yes. Until China, US and India collectively decide to do something, potentially add the EU to that bucket (far harder to sort out), any discussion on climate change is a waste of time.

I feel dirty linking it, but there is a good graph showing China’s emissions (total and per capita):
https://www.macrobusiness.com.au/2019/11/china-drives-planet-towards-climate-catastrophe/

You are spot on though, their per capita is now more than the EU.

One can wish it is that simple.
Chinks may be more coal efficient producing consumables we devour and have highs from in comparison to the same disposable cr@p being produced locally.

CO2 production cannot lower without weaning out developed countries (and others too) from consumerism and in waste producing. It is a catch 22, a lifestyle change is required.

Carbon dioxide production (sh/c)ould be taxed in the country of consumption as an incentive to consume less but that would never happen because of profits and how easy is to export own CO2 into countries of manufacture.

Nowhere to be seen on the media will be the linkage of number of people with total emissions. If Victoria didn’t import people at 3% per year, they could have closed down most of the power stations in the La Trobe valley.

Yes this is the elephant in the room, if you want global emissions to go down then we need to reduce the number of “consumers” in the world

Thanos had it right

Never understood why he was the bad guy lol

Thanos had it right

Never understood why he was the bad guy lol

I have actually spent a little time thinking about this previously.

Initially it seems hard to impeach the Thanos approach on any grounds other than social or religious.
social: some kind of appeal to inherent and inalienable human^ rights
religious: sanctity of all human^ life, as being in god’s image.

^however, most creatures in the universe that Thanos inhabits are not human and the universe doesn’t seem to contain a god of the kind in whose image the creatures were uniquely made. That makes this kind of impeachment of Thanos’s approach hard to sustain.

on the other hand whereas humanity has the issue of “we only have one planet” to contend with, in Thanos’s universe this is clearly not an issue. So perhaps there is a purely pragmatic reason to resist thanos in his universe (ie resource depletion doesn’t seem likely).

Back on Earth, where resource depletion is real, we’re back to the thin and tenuous veneers of the social and religious heads of dispute.

Rumour has it that Joe Biden pooped his pants at the Vatican, apparently it’s hereditary as it runs in his jeans…..