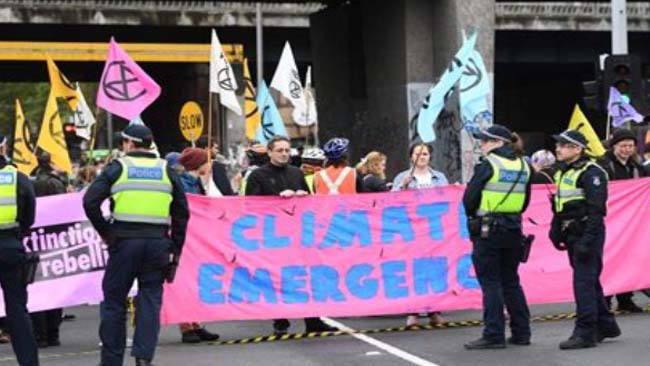 The protestors, trying to manufacture consent for the destruction of the Australian economy, blocked off parts of the Melbourne CBD and were rapidly attended to by officers bearing refreshments.

“We’re terribly sorry we inconvenienced their protests by not attending to their needs sooner, unfortunately the tea was a little cold but we got to them in time,” Patton said.

“I salute the bravery of the protestors, as we face one of the greatest challenges of our time.”

Patton announced that they would be considering bravery awards for protestors that had glued themselves to tram tracks.

This is how you deal with those Extinction Rebellion w@nkers

Privileged middle class twats. They should be sent for re-education in the country shearing sheep or digging ditches.

Won’t happen in Victoria as Andrews needs the Animal Justice Party to get all his draconian legislation through.

I know a woman in her early 40’s broke out in a big rash and was diagnosed with heart inflammation after rolling up her sleeve a month ago.

Just this weekend a woman I know in her late 30’s dropped dead from a heart attack. Wasn’t appropriate to ask if she also rolled up her sleeve, but odds would be she has.

I don’t get how more people aren’t talking about this – bad things are happening to the vaxxed.

People are starting to take third shots too!

don’t get how more people aren’t talking about this – bad things are happening to the vaxxed.

dude, you didn’t really think that saving the boomers would be free or cheap, did you?!

Two blokes I’d worked with for over 20 years dropped dead out of the blue in July and August. No “short battle with x”, just didn’t come to work one day.

I expect to see more of that over the next year.

This is very sad.

Nah faggit, you and this cunt are sad and what’s sadder is the circle jerk you all engage in. Do the world a favour and neck up ya dumb fuck

Look it’s waffling. I had thought the vax took you? Apparently it didn’t. Bugger.

Think I said this before but two heart attacks in blokes under 40 at my workplace.

Neither have come back to work and everyone knows what it is. And they’re still trying to kick me out for not taking it despite all this.

Wait until northern hemisphere winter gets going and the ADE kicks in.

stfu ya larping faggit. neck up for reals, all you do is pretend and pretend