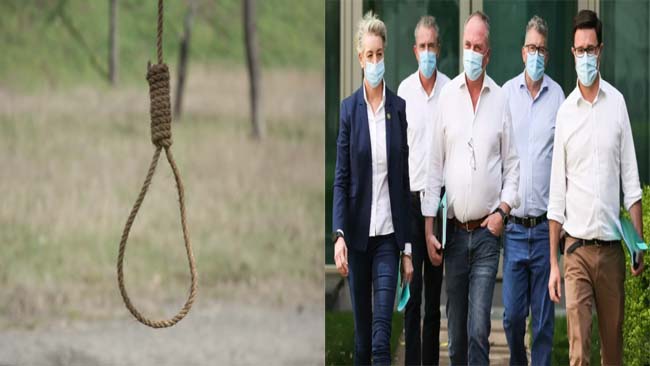 Rope has sold out across regional EZFKA after the National Party announced it would support the Net-Zero proposal.

Bunnings, Mitre 10 and other hardware stores reported queues to buy rope and timber had stretched out the door after the announcement. regional Queensland and Western Australia were particularly hardest hit.

Tamworth farmer Davo, 42, said he raced down to buy a length or two, as soon as he heard the announcement.

“Soon as I heard that mate, I thought there’s only one solution to this farkin’ carbon problem and it involves Barnaby not emitting any ever again, if you catch me drift,” Davo said.

“There’s some carbon we need to eliminate all right. Most of it comes from Canberra.”

Barnaby Joyce has not been seen and is believed barricaded in his office.

Scotty leaking like a sieve against his own team. Would be funny if the Nationals abandoned the Liberals for UAP.

Leaked text messages reveal Nationals MP were fuming after details of their list of demands for agreeing to a net zero emissions target were canvassed publicly, before they had seen it, with one accusing the Prime Minister’s office of leaking it.

A series of messages sent by senator Matt Canavan to his Nationals colleagues on Thursday night and Friday morning, leaked to The Sun-Herald and The Sunday Age by another MP, suggested a media story on Friday about the party wanting a socio-economic safety valve for the regions “reads like it has been planted by PMO”.

Looks like the Nationals were bought off cheaply – all it took was to put Keith Pitt into payrise.

*into cabinet for a payrise.

Have I just lost my big lay bet on the filthy treacherous Labor party?

I love the MSM and MB talking up Labor firmly leading the irrelevant 2PP.

nat’s will be punished over this, but IMO it won’t translate to Labor winning too many of their seats.

Regional areas have no relevance to the election outcome. Elections are won/lost in the aspirational areas of the cities I.e. the areas that need funding for sports rorts or car parks.

For most, knowing what was it like in USSR to be a free thinking (cartoonist) is difficult to fathom. Every case was followed by a comprehensive smear campaign from every angle possible and a total destruction of the character. For harder cases, it was internment into camps otherwise known as gulags.
When I got my immigration approved 25+ yrs ago, I could not even imagine we’d come to this stage where one could not see the difference from China.

2 weeks “hard” qtine and the top 2 players can play. Hard will become soft, then it will be “rented house with a tennis court” hard which is what Djoker asked for all the players earlier this year.

So Novak and Medvedev can come and play.

I wonder what the difference is?!

When our own Causesku announced the spurious proposition which lies olely in hands of the AUsOpen sponsors and besides it was just a mere professing of power for the masses, my view became that anything will be used to churn more jabs out of desperation.
I am now shifting my view that the more spurious claims about the future actions the less likely it will remain. I reopened to the possibility that 2022 will see mos or all limitations and ‘mandatations’ .

Bigotry is obvious but pressure cannot be exerted past own plebs.
We are still to see where we end up, though… fat women still sings.

Even the most cucked Aussie won’t put up with that surely.

PS – truly a shameful display in respect of Leunig.

Now even laughing stock of Ruskies…

Westworld’s msm does not need enough rope to be given, it makes it own, nice and strong, with every passing day.

Ramjet
Guest
Reply to  A fly in your ointment

Putin makes more sense about cancel culture than so called leaders in the western world.

Well there you go. I did think that he self published the cartoon after being rejected numerous times, so not sure if censorship would be entirely accurate.

Not so surprised Djoko – just have to follow the money.

A fly in your ointment
Guest
Reply to  Gouda

As much as Djoker and Medvedev have some power and say on the matter, their power is limited.
It is ATP, WTA and AusOpen/ sponsors that were not consulted by ‘Causescu’ prior to attempting to make an example of Djoker. Djoker was a luring and seemingly easy target as we all know his stance from last year and his say on choices so…

It ain’t over.
Will local sportsmen rise and rebel?
Ashley Barty said she is pro choice but then said she waxed “to protect those around her”. Noice, but fail. Still better than no say.

I am appalled by what being an Australian has become (with some exemptions): a nation of disoriented complacent non-critical thinking mortgage sheeple. This is so severe that I am now certain the future is bleak and a war (China) will be needed to distract and lay blame.

This response should’ve been better placed with the other pro choice sportist topic.

That description fits most people of most places and times. The motivations and desires of those that are not is what matters.

The man who spearheaded Australia’s post-COVID-19 economic task force has been charged with breaching Western Australia’s coronavirus border restrictions during a private helicopter flight from Queensland. Police alleged Neville Power and a 36-year-old man failed to complete G2G passes before flying into WA on October 9. Mr Power, 63, was the head of the National COVID-19 Commission Advisory Board and is the former chief executive of Fortescue Metals Group.

My bet is he’ll get a slap on the wrist.

Didn’t those two p00fters get 3 months in jail for sneaking into WA for the AFL Grand Final.

Lets see if they give a high roller like Power a jail term.

Replace the LGBT-friendly Greens, the Liberals, the Nationals and the Socialists…..with Hetero-normal, Family-friendly National Socialists.