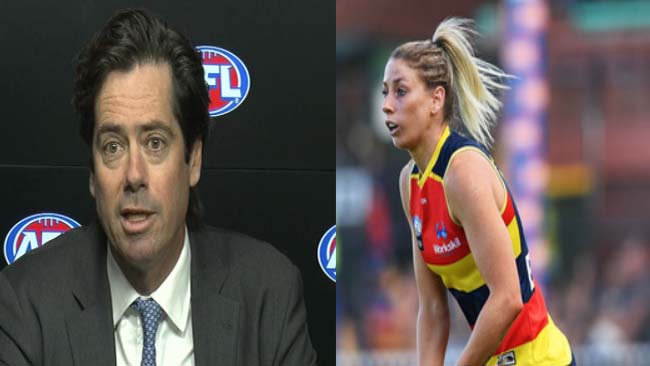 EZFKAFL CEO Gillon McLachlan has stated that the AFL remains committed to “gender equality and inclusion” despite an edict banning unvaccinated players.

Adelaide Crows member and ICU nurse Deni Varnhagen was banned from the league this week after stating she did not want the COVID vaccine, despite no-one seeming to ask the question why someone working in ICU does not want the experimental jab.

“Our league remains committed to diversity and inclusion, except if you make a personal medical choice about a virus that hasn’t impacted our league the last two years,” McLachlan said.

“I mean we’re just another one of these Australian institutions that’s rammed diversity, equality and inclusion down everyone’s throats for the last five years ad nauseum. Bullshit lip service is what we do best – be it a Welcome to Country ceremony or AFLW.”

The mandate takes effect from February.

Saw This, good on her more courage than all of the men’s league combined.

What about unvaccinated trannies. Inquiring minds want to know!

I think with the male players it’s not like they’re qualified to do anything else but sportsball, so I wouldn’t expect too many of them to go public about giving up their livelihood. The women aren’t paid much at all and mostly have second jobs. If Deni was in any other field where it wasn’t mandatory I suspect she’d quietly retire from the sport if she refused to get jabbed. The AFL will have mandated it because all they care about are sponsorship $$$, and they’d probably prefer it if one of their players wasn’t making the news for those reasons.

My bet is that she’ll end up getting it. Thinking about all the nurses I know, there’s only been one who was vocally anti-vax, and in the end he caved despite all the talk about changing careers.

All people are equal, some are just more equal than others.

Hold on, that was in Soviet Russia, no?
Or is it Soviet-EZFKA?