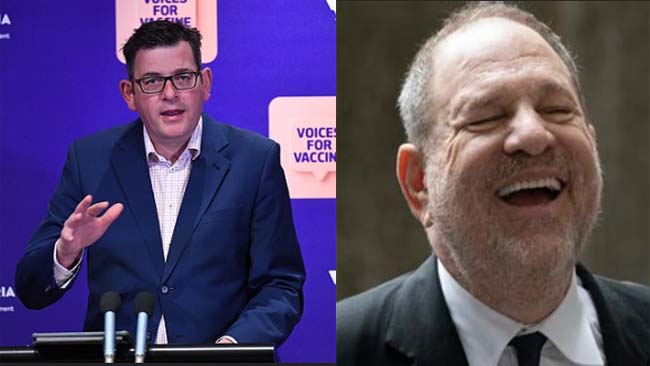 Coming off the back of it’s cringey “Mask Up and Melbourne On” campaign, the convicted rapist will star in a series of ads urging Victorians to disrobe and insert something into their bodies against their will in order to feed their families.

Andrews denied allegations that the campaign was ‘grossly inappropriate’ after the ALP supported the #MeToo movement and has been advocating for women for the last 8 years.

“I reject the premise of the question that it’s inappropriate and I’m only acting off the best health advice for women and the rest of Victoria,” Andrews said.

“Much like any mandatory vaccine, if anyone knows about an application of force and a lack of consent, it’s Mr Weinstein.”

The advertisements will be directed by Jessie “PRGuy17” McCrone and will debut next week.

Amazing article dealing with an arbitrary date and arbitrary rules as some sort of a science in a similar fascion as “sale MUST end on so and so date”.

Note the miracle numbers raise, a basic tale tell for numberwocky being formalised.

I am not complaining, if this is how they walk back on it so be it, as long as they undo all of it.

Epidemiologist Professor Adrian Esterman successfully predicted that cases had peaked in September and said the decline in cases was down to the state’s vaccination rollout.

“I believe what we’re seeing is the vaccinations kicking in because nothing else has really changed,” he said.

…and yet we forgot that the “science says”(tm) wax does not prevent spreading.

It’s a rolling update page, scroll down to titles “miracle” and “leaked data about leaky wax”

The professor is a fucking genius. He “predicted” a peak after he saw a peak in the rear view mirror.

looking at data from lots of locations, it’s quite clear that there is almost never a beartrap in the case numbers – once they turn down, they keep going down. 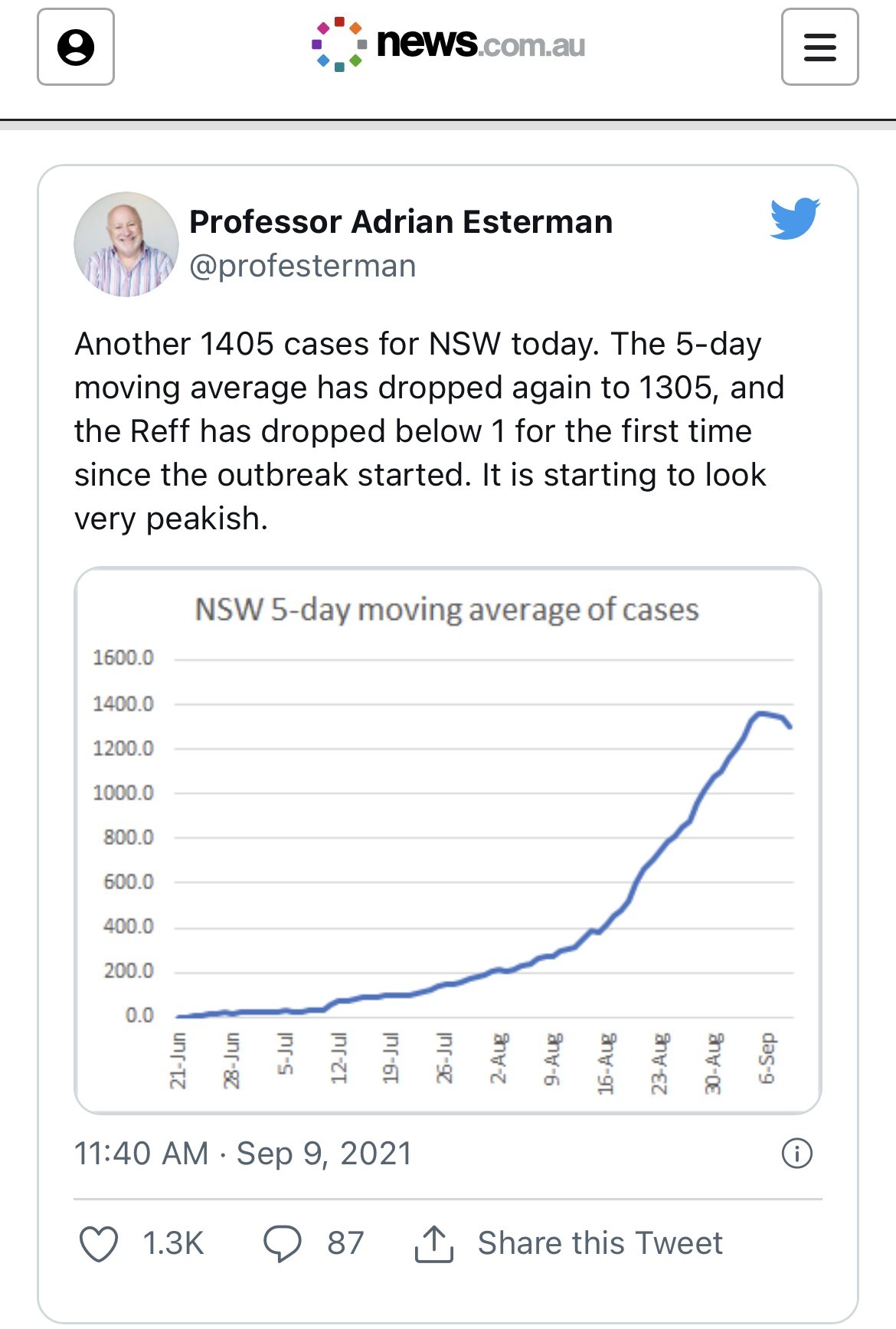 there is almost never a beartrap in the case numbers – once they turn down, they keep going down 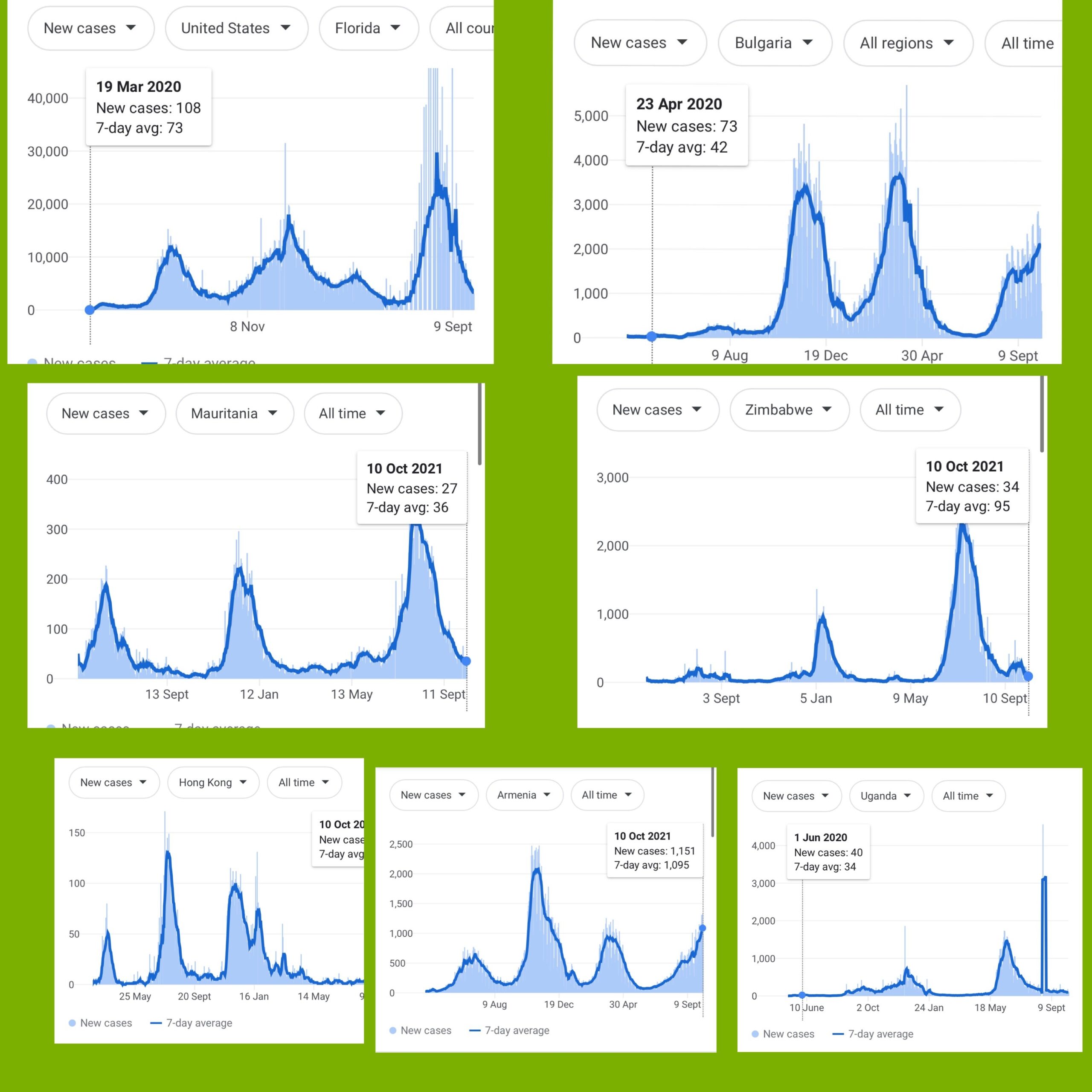 He is better at predictions than DLS.

A fly in the ointment
Guest

“With this decision, the court rightly recognized that yesterday’s ‘front line heroes’ in dealing with Covid cannot suddenly be treated as disease-carrying villains and kicked to the curb by the command of a state health bureaucracy,” said Christopher Ferrara of the Thomas More Society.”

This is in the US of A, a country that we rightfully thought had less democracy than our own, burried deep into gulibilty that present condition cannot be changed on EZFKA… but then somehow we sinked into new uncharted depths.