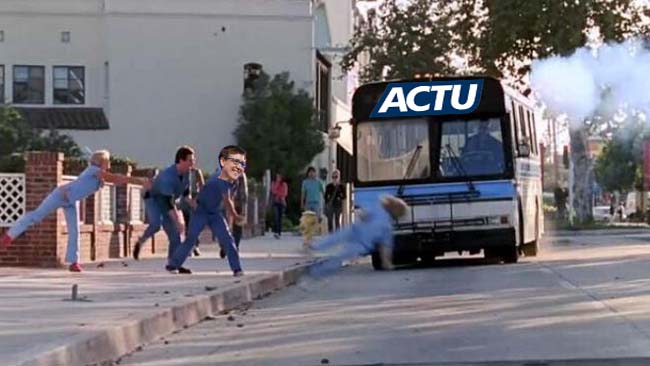 ACTU Secretary Sally McManus has unveiled a new “mandatory vaccine bus” that will be touring EZFKA workplaces from next month.

McManus denied allegations that she was a fucking useless quisling and that she hated EZFKA workers.

The bus, which has mandatory vaccinations on board, will also feature a re-enforced bull bar and eight wheels which will ‘process up to hundreds of Australian workers a day.’

“I’d like to thank all the union members across Australia for their union fees. Without your money this would never have happened,” McManus said.

“This bus will have a dual purpose of forcing people to have a medical procedure to keep their income, as well as running over the top of those who don’t comply.”

The bus will start on construction sites across Melbourne next week.

No mention of a reinforced bull dyke?

Really annoying it is not a woman, Mc Anus, they all have weird names. Like ida Butt rose. These people are cult members and placed in position to destroy everything fought for by our grandparents. They are not women, really look at them, its hard to spot the younger ones, but hags like anus. The Vatician cult, like to do this as its an insult to the divine goddess real women are. Chopping off a dick, inverting into your body, sorry it does not make you a women, just like tanning dark, will not give me the right to say i understand racism.

Re: Your comment is approved! You changed your mind? Editorial right, yeah x