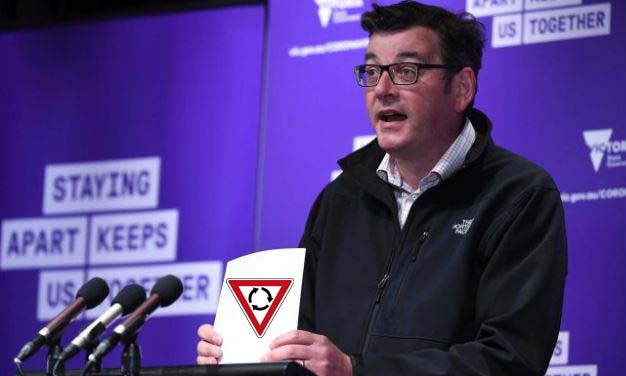 Premier Daniel Andrews has unveiled a picture of the new roadmap to end lockdowns, which was revealed to be a picture of a roundabout.

The EZFKA state has been hit the hardest with restrictions in the past 18 months and the Premier conceded he had no other ideas other than the same old shit.

“In reality it will just be the same old threats, get tested, lockdowns, get jabbed and Police state bullshit we’ve been repeating since March 2020.”

Andrews further confirmed that the goalposts will indeed again shift at the next press conference.

Now there is someone more obnoxious than waleed aly.

People have done their own roadmap out and it is blindingly obvious everywhere you go. People were already meeting up in parks, exercising for hours, having parties, etc.
The main people waiting for the announcement are the #IstandwithDan EmBee subscribers who are cowering under their beds. Even LVO has written “there is more to living than worrying about dying”. Many on that site having probably not felt UV rays on their skin since March last year and are finding excuses to still be locked up (won’t anyone think about the children?).

With such a long while without sunlight, I think the blokes will need bcnich’s best tips on when to spread their legs and expose their hoo-has to the sun flares in order to catch up on the sun-debt…..

Premier Dan makes a great point – we have to ‘circle back’ to get where we’re going. It’s only two weeks to ‘flatten the curve’ people, so just be patient. We’re all in this together. #standwithdan

When are the elections due in Danistan?

They may need to be delayed in the interests of keeping the public safe from the covids.

Two weeks after the next state of emergency is declared.

is There currently a state of emergency? When does it expire?

Nobody knows. And they aren’t allowed to tell us either, because of the state of emergency. That’s what makes it all so terribly exciting.

Of course, there are roundabouts, and there are roundabouts! This one used to be on my commute. Don’t be alarmed though, it’s actually easier to understand than the NSW Public Health Act.
https://www.bbc.co.uk/wiltshire/content/articles/2008/03/28/swindon_magic_roundabout_2008_feature.shtml