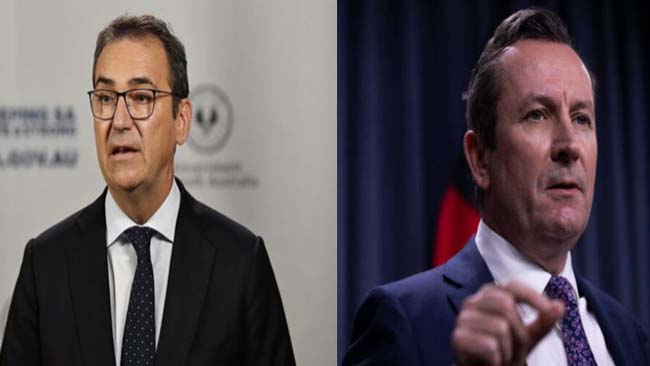 The EZFKA states of Western Australia and South Australia have been named as the two finalists for the CCP Vassal State of the Year for 2021.

The two EZFKA states beat out some notable challengers from Africa to make it to the top 2, after months of totalitarian bullshit imposed on their respective populaces.

Premier Steven Marshall said he was delighted that South Australia was finally renown for something.

“It’s been a hard slog but I think our new facial recognition app for home quarantine, which will of course become permanent, will get me over the line,” Marhsall said.

Mark McGowan said he was confident WA would get the nod after constant border closures and zealotry from WA Police, including checking bank account details at the airport.

“Consider it a state of origin in selling your region out to the CCP. We have the mineral wealth so I think President Xi will do the right thing and pick us,” McGowan said.

The award will be announced from an aircraft carrier in the Straits of Taiwan next month.

OTA but my blood is boiling..
Machiarini should be hunted down

Marshall must be chuffed to have his photo up there in the article, Timbo.

nobody else ever published photos of him!

He would be. Pretty certain he was referred to as a Labor Premier once or twice on this site 🙂

That said, remaining invisible at this point in the game is desirable in itself I’d say.