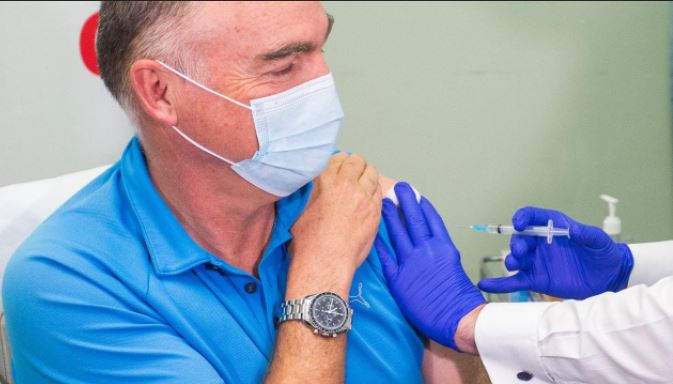 A man in the EZFKA city of Melbourne has stated that he’d much prefer to wait for Pfizer’s vaccine and Myocarditis, rather than risk it with blood clots from the Astra Zeneca.

Drawing inspiration from Newscorp journalist Georgie Parker earlier in the week, David O’Reilly, 56, from Malvern said that he was not going to take what he believed was an inferior vaccine and respectively, inferior side effects.

“Listen mate, I want that Pfizer jab. I’m not a pleb, Myocarditis is a much longer-term side effect that I can milk for sympathy and attention. That’s why most Australians are getting their jab isn’t it, apart from the naïve hope they’ll get their freedoms back?” David said.

David said he planned to post the hospital photo on social media along with the usual self-pity daily updates, about how his stupid decision wasn’t his fault.

“Bring on the Antibody Dependent Enhancement and six-month booster shots.”

It’s really amazing the marketing job that Pfizer have done

we now know that az is
-more effective than Pfizer (against delta)
-safer for men in particular
-probably similar safety for women
-any differences in safety are at the absolute level of like 1-2 per 100,000 anyway

plus our politicians and health officials bizarrely willing to indulge them, or even outright encouraging this retardation

at the same time doctors are not allowed to give any opinion on the relative merits of the vaccine , under threat of deregistration

What is the bet that the Pfizer coming from Poland is the excess fake ones that they don’t want anyway, and once they are here .. whocouldknowed ….

TBH I think that we are lucky in a way, because of this lockdown there is less chance of lambda or delate+ getting into the country and it gives us a chance to close the borders completely while even more deadly variants rampage through the rest of the world. The problem with non sterilising vaccines is that they breed nastier versions till such time as the weak are eliminated and there are a lot of weak out there thanks to modern medicine keeping people alive that should not be.

My bet is that in 5 years there will be 50% of the current world population and things are going to be a little different around here, I could well be one of the casualties so plan to enjoy spending time with my family as much as I can while we are still safe.

Our borders being closed is a myth. Our borders are open for a cost that very EZFKA entities can afford. Basically open for the wealthy, celebrities and sporting people.

I had a rant at work yesterday about lockdown. Basically we all did lockdown last year to help protect the asset owners oldies. They were first up to be vaccinated and they decided, we don’t like AZ and we’ll wait for Pfizer. Now, we are in lockdown to protect them whilst they wait for their preferred jab. No one is calling out this retardation. The health ministers are complaining about the lack of Pfizer whilst being mute about the oldies not coming forward to be vaccinated as lockdowns were benefiting them. So the cost has fallen to the young as they are more likely to be in more casual work, they live in smaller dwellings meanwhile the boomers zoom into work meetings in their home offices in their large houses.

I think the whole pandemic is largely a result of good marketing/PR by the pharma companies. Vastly more years of life lost could be saved by eliminating smoking, or sugar being added to processed food. However, the politicians will not touch that as there are not any bribes in it for them and the companies that profit off selling the filth would fight back.
On the other hand pharma companies have made billions off covid vaccines.

A new study was just released looking at blood clots in the Astra Zeneca Vaccine. The short summary is that the prevalence of clots in people < 50 years old was > 1:50,000 with a 23% chance of carking it if you get a clot. View the paper here https://www.nejm.org/doi/full/10.1056/NEJMoa2109908
Therefore, no one who is young or healthy should touch the astra zeneca vaccine with a barge pole.

And what is the chance of getting blood clots or other health issues from actually getting delta? In the name of balance and all.

Good question, but the chance of dying from covid for the under 50s is only around 0.05% and then undoubtedly heavily weighted towards the obese and diabetics so there is still very little to no reason for the young and health to get the vax.

and whats the chance of getting myocarditis from the pfizer vaccine if you are young?

Don’t know, but I would definitely consider checking before getting injected with it.

Don’t forget these are vaccines that will need to be taken for the rest of your life, so I’d like to know if the clots develop in people susceptible to clotting who will be cleaned out in the first roll out of the vaccines (if they survive they won’t take a vaccine again), or is it random chance?

If random chance, then taking 1-2 boosters per year for life that 1 in 50k chance of developing clots suddenly drops to maybe 1 in 500 or 1 in 1000 over the course of a young person’s life.

maybe some of our medically cluey blokes can share their guesses at this….

Whilst I wish Georgie Parker a full and speedy recovery, she is an absolute muppet! She shared a linkedIn post which was nothing much virtue signalling how brave she was and that she’d still get jabbed again! I mean, what is wrong with her mental faculties?

Given her age, you’d have more a chance of being hit by a car then dieing from Covid.