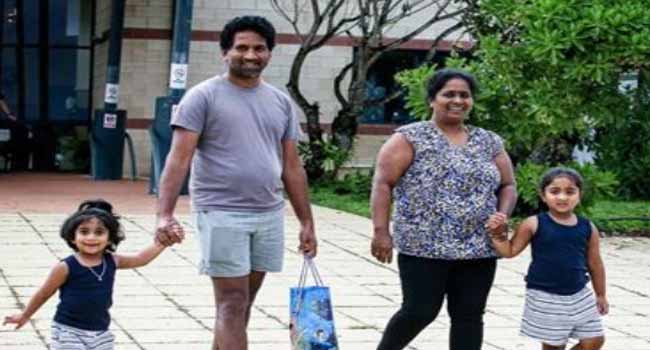 The Tamil family will be going on holiday to Sri Lanka, to celebrate being granted a temporary visa by the acting Home Affairs Minister Jim Chalmers.

After being told by every legal institution in the country that their claims were fabricated bullshit and costing the Australian public millions, the Murugappan family plan to put their feet up in the country where they claim they can never go back to.

‘It’s been really stressful with all the travelling back to the Middle East via Sri Lanka to work multiple times while claiming we’re persecuted, feigning illness, the staged photo ops, using our kids as anchors, relentless media campaigning by our opportunist migration lawyer and the rest of it that we thought, why don’t get away for a while in the country where it’s apparently too dangerous for us to ever return?’ Priya said through an interpreter.

‘We have no plans to ever stay in Bileloa, that was all bullshit from the start. As soon as our lawyer bullies Clare O’Neil into giving us permanent residency then we’ll fuck off to whatever major city has most of our diaspora, like everyone else does.’

The Murugappan family say they intend to spend the next few years dragging the process out even further until their child turns ten and can claim citizenship, while ‘gleefully watching their compatriots back in Sri Lanka suffer an economic collapse.’

lolz, can someone tell me what the story with this family was/is

TL;DR – family of Sri Lankan Pajeets claimed asylum to try and stay in Australia despite travelling to Sri Lanka and other countries multiple times during same time. Had a couple of anchor babies. Had asylum claims rejected 7 times up to and including the high court but have run a non stop sob story campaign and got the minister to grant them a visa.

The funniest part is that out of a town of about 5k only 10 or so showed up to welcome them and I doubt they were even from the town.

Timbo’s article is spot on, they’ll fuck off elsewhere at first opportunity. Imagine being one of those still living in tents in Northem NSW because of floods destroying your house and seeing these filth getting everything handed to them.

so they got a bridging visa, what happens if they get rejected again in the final asssessment?

this goes to what i have been saying for years, if you know how to play the system you can buy yourself 10 years or more by jumping around different visas. a good pathway is student visa -> partner visa (bridging) -> rejection -> claim family violence -> rejection -> appeal -> rejection -> final deportation if it even gets to that, there’s about 8 or so years all up in that.

Essentially they got a ministerial intervention bridging visa, which is a 12 month thing. They’re trying to play the game as Timbo said until their oldest child turns ten and then apply for citizenship.

Also allows them to get around the English requirement. Funniest thing was the father speaking through an interpreter the whole time and claiming he’s done everything to integrate into Australian society.

This one really fucking riled me up

this is a school example of Aussie oi-oi sheetfluckery.
reject the unbased asylum and move on or make lotsa virtue signaling and make simple things complicated and a disaster. Cue Djokovic in.

you voted for this shitfuckery… you essentially got what you wanted. the sediments of the “Western values”

in the mean time, in the free(er) world, ban on propaganda to minors is expanded to all subjects. Makes me feel I should seek asylum there.

Massive outpourings of gibberish on twitter about our humanity, and what a great thing this is yadder yadder from the usual deluded latte aipping, virtue signalling fools. Everybody else knows that these people are just taking the piss.