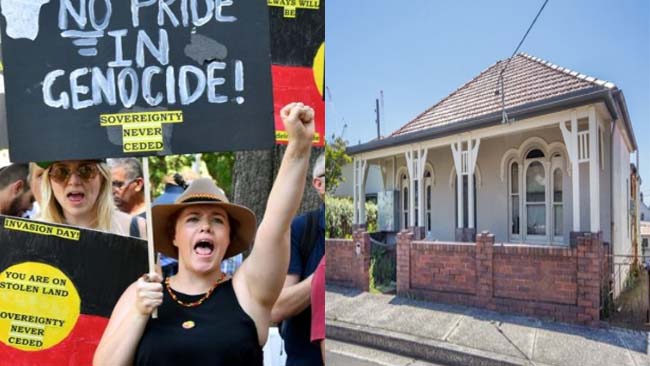 A Bondi woman has celebrated ‘Invasion Day’ by selling off her family property on the North Shore for a large sum, to a Chinese property development firm which will be subdivided for apartments.

Belinda Davidson, sold her 4-bedroom Bondi residence to Chinese firm Peng Shuai Fukt Pty Ltd for an undisclosed amount, and said that she remained committed to fighting white privilege and recognising Aboriginal land by selling a part of it to foreigners.

‘This was and always will be Aboriginal land. That’s why it’s important that we invite as many people here from other countries to live on their land with us,” Davidson said.

“Everyone has a culture except white people and we know the Chinese have an exemplary record on human rights and land ownership. It’s racist to oppose that.”

Davidson said that apartments would be rezoned for social housing for international students only.

In other news, The Aussie Cossack is running as a candidate in the upcoming election:
https://youtu.be/jG1SfHDZFOU

I saw tgat. He literally hijacked the protest for himself, next level grift

He’s running independent? Must have fallen out with Craig Kelly.

Boikov did more for freedoms in this country than most.
That does not make him a saint, he is a grifter of highest order but imagine where the country is if grifters are the last remaining ‘defenders’ of decaying freedoms.
When human cesspool like PHON, UAP and the ilk are the last men standing offering a red pill, there cannot be a place more wicked.

Agent 47
Guest
Reply to  A fly in your ointment

Boikov hasn’t done anything except film himself provoking cops and Yemeni-level staged confrontations so he can monetise YouTube views, and then jump on the UAP grift bandwagon. Which he seems to now be distancing himself from as he built a big enough profile and doesn’t need Craig.

I don’t disagree, just point me towards someone whom have done more for popularising the resistance to creeping fascism and I will ditch him the very moment
Campbell Newman seems the only normal politician outside the mainstream parties but he was not vocal. Sometimes tiny little Yorkshire terriers can do more than big dogs by just being first and loudest to bark.

It’s always been my thing to ask the likes of smithy if they’ve asked original Australians if they’re okay with inviting 400k immigrants a year.

She is a school example of lefties leaching on every conceivable issue to advance their extreme views.
Hypocrisy galore mob.

I’ve been recently thinking smithy might be David Llewellyn Smith.

Llewdo Smithy is not witty with words trickery like smithy doctress. I thought drsmithy was a mangina but then realised he is a she…

Yes, that adds up.

Smithy has referred to a wife many times….

Fabulous! Always Was Always Will Be.. Somebody Elses

“Everyone has a culture except white people and we know the Chinese have an exemplary record on human rights and land ownership. It’s racist to oppose that.”

Nothing to do with whities, those that became acceptable ‘whities’ in post WW2 era are treated with the same contempt as all the non-wasp’s. Unwashed like to project themselves as part of the UberAussie wasps against clear signs that whey are observed just as a wasp version of all the other deplorables. Cognitive dissonance sheet galore.