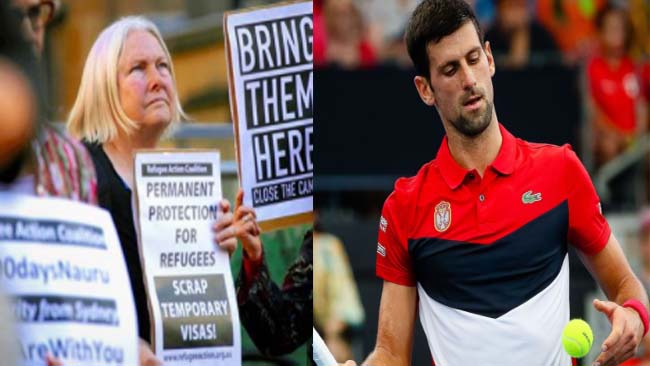 Millions of people across Australia have turned into immigration experts overnight, after tennis star Novak Djokovic had his visa cancelled for the second time.

Dr Harold Jenkins of the Midwit Institute said despite the ridiculous Djokovic saga likely being a distraction from something else, the proliferations of shitty opinions from people who know very little about immigration was at record levels, particularly among middle class white women.

“Most of these people, from the Twitterati to the usual cash-for-comment crowd, have never read the migration act or understand any of EZFKA’s immigration laws or visas, but like all good Dunning-Kruger sufferers they all have a strong opinion on it and they’ll let you know on social media,” Dr Jenkins said.

“What we’re seeing is the usual progressive open borders crowd pivot from their position of the entire third world should come to EZFKA to replace white people forever, to being tough on borders all of a sudden.”

“At the same time, we’re seeing the tough on borders conservative crowd want special treatment for a millionaire athlete because economy and contributions to EZFKA. It’s really quite the conundrum.”

Jenkins said the tribalistic bullshit could be fixed but would be difficult to.

“It’s entirely reasonable to have other positions such as scrapping the stupid COVID regulations altogether while also being for scrapping mass immigration of all types altogether, but these don’t get a look-in with the average 100 IQ EZFKA midwit who sees everything as a binary choice.”

Over the last week, the government has wasted both time and taxpayer money pursuing the deportation of the tennis world number one, making themselves look like fools in the process. After initially being granted a visa and an exemption to enter the country to play in the Australian Open, Djokovic flew over only to be held in detention at the border, and then in a hotel for a further four days after his visa was cancelled at the last minute by the federal government.

But, as a Federal Court judge would later find, Djokovic did nothing wrong. What occurred was pure politics. Tennis Australia had been told by the federal government that it was the responsibility of the Victorian state government, that being Dan Andrews and co, to assess vaccine exemptions. Responsibility was then lumped onto Victorian Chief Health Officer Brett Sutton, who declared that individuals who had previously been infected with Covid were permitted to enter. Having been infected a few months prior, Djokovic fell into this category.

However, once the sports star announced he was on his way to Australia on social media, there was an uproar by the mob who believe that unvaccinated people are selfish, unclean, and should not be allowed to participate in society. Criticism was lobbed at the Victorian government, who then threw it over to the federal government to sort out.

Instead of choosing not to engage in the drama and leaving it to his Victorian counterparts to deal with, Scott Morrison decided this would be a fantastic opportunity to put his cowardice on full display and take on the burden of the Andrews government mistake. Soon enough, Home Affairs Minister Karen Andrews had cancelled Djokovic’s visa.

Yet just days later, in the dying hours of Monday afternoon, Federal Court Judge Anthony Kelly served the government an ace and demonstrated common sense, ruling in Djokovic’s favour, overturning the cancellation of his visa, and ordering them to pay his costs. Yet again, the government had managed to make Australia the laughing-stock of the world leaving taxpayers to foot the bill for their antics.

I personally DGAF about Djokovic and think the border rules are stupid but mass migration is equally stupid. This whole misery loves company mindset that so many people seem to have ‘I suffered so he should to’ is fkn ridiculous.

Plenty of other options.

Yes, Djokovic found himself in the wrong place at the wrong time, and his head is on a pike as a result.

The mob was angry and the elite found the perfect person to make an example of.

After this farce, why would you hold a grand slam in Australia? It is an exhibition for the elite anyway.

Well done. This article and the article slamming all the professional provocateurs like Jordie and Avi, makes me realise I have a lot more in common with Timbo than I initially thought.

The real question here is whether the federal court will stand up for human rights or side with Scumo and his grubby immigration minister. If they allow Novak do be deported as a threat to public safety it makes a mockery of ministerial power.

You have to laugh about it all.

They invoked a law used to kick terrorists out of the country to kick out the best tennis player of all time, a man of sound character, one of the healthiest people on Earth all because he didn’t take some medicine that doesn’t even work particularly as evidenced by Australia having 100k cases per day in the most vaccinated population on Earth.

Djokovic isn’t dangerous. Holding a tennis tournament with tens of thousands of people in attendance each day while COVID is out of control across the country (despite 90% fully vaccinated) is the definition of dangerous. Does not get more dangerous than that. Djokovic just has a different belief which he rarely discusses in public.

One of the criticisms levelled against Djokovic is that the Adria tournament he held in mid 2020 where some players and fans caught COVID was reckless and dangerous.

Australia right now is hosting one of the biggest tennis tournaments on Earth despite 100k cases per day, players already having caught COVID, tens of thousands of people in attendance every day of the tournament, no doubt hundreds if not thousands of fans will catch COVID from attending the event over the next fortnight.

It’s a farce and logic does not apply. The message is loud and clear though, get on the wrong side of the government and not even the country’s own laws will protect you.

ive not followed the ins and outs of this & not familiar with the history of the “little tournament” you mention, but from what I gather the whole situation is laughable.

there can be no practical reason for booting the guy when there is 100k cases anyway AND 90%+ take up of the mystery-jab.

the good thing about this happening is that it puts a nice stake in the ground for when EZFKA started prosecuting and deporting people for thought-crimes.

Nick Kyrgios is the voice of reason. Welcome to 2022.

Maybe Bill is repositioning himself for the eventual shitshow the comes from this. I wonder who the scapegoat(s) will be?