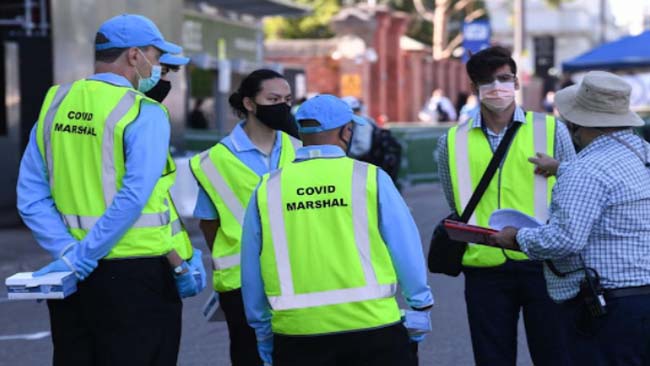 A new landmark study has shown that EZFKA’s new COVID Marshalls and Authorised Officers should go and get themselves some actual productive employment.

The study, conducted by the Pay Us Protection Money Institute, found that black shirted government officials enforcing COVID mandates were essentially useless and should ‘fuck off to China.’

“Victoria is the worst offender. I mean, it’s legalised mafia tactics but whatever. They really need to fuck off and be productive elsewhere.”

More marshalls are planned for Victoria, as the state tries to recuperate costs from it’s nation-leading debt.

I remember seeing a video doing the rounds from a couple of weeks ago, in Victoria of a couple of literal black shirts harassing some poor cafe owner that he didn’t have the mark of the beast in the window, no hand sanitizer etc.

I saw someone today walk into Kmart saying no “wax branding” and just walked in… as if nuttin happened.
It seems that noone supports wax branding other than a few waxi-nazi’s

Victoria is close to bankrupt and it is doubling down on the thing that will ensure bankruptcy: mass immigration.

That’s IF an election even happens.

There expecting 1 million people on Saturday’s march in Melbourne. Surely the powers to be are nervous this could turn into something bigger and that forcing Dan to resign or give notice that he will not contest the next election is worth doing to keep the plebs in line.

Dan will resign once John Holland has a plum board role for him.

Given the vibrants are getting paid pittance it means that Vic becomes a 3rd world state, besides how many vibrants are going to want to some to CCP Victoria

Nothing to see here. Move along.

Yep and there was a div 1 match a couple of weeks ago at Bristol where two fans collapsed and the game suspended twice.

This was the kind of thing I would hear about once or twice per year. It seems every week now.

It’s definitely something that happened very occasionally pre-covid. But now…

I think there’s been over a hundred on field collapses in the last 6 months or so, with many deaths. It’s insane. All these you sportsmen at the peak of energy and fitness left dead or crippled.

They’re not putting that shit in me!

The young and/or fit ones have been handed the bill for the unfit ones.

and it ain’t a small bill.

Seems all too familiar, tax the youth to save the boomers ….