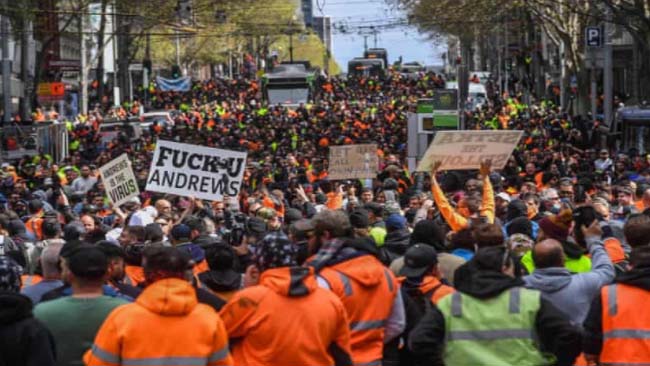 This isn’t intended to be much of an in-depth post, but more of a thought bubble and general discussion point I have seen being brought up more and more around social media.

This weekend is expected to see the largest protests ever against Daniel Andrews and respective state and federal representatives, in response to the draconian pandemic legislation being considered in Victorian Parliament. Similar events are happening all over the country.

In the last week, we have had a suspicious package allegedly mailed to Daniel Andrews’ electorate office in South-East Melbourne. Andrews was heckled in Bendigo and the CHO Brett Sutton was confronted outside Parliament House. (I think those last two events were deliberately done as bait by the way) Crossbench MP’s such as Fiona Patten and Andy Meddick who are voting for the legislation, are also playing the victim card and there are continued ‘calls’ in the mainstream media for increased security for members of parliament.

If by now you haven’t read into what happened at the Capitol Hill in the US on January 6th (what actually happened, not the MSM version of events) it was a peaceful protest that was co-opted into a false flag event, orchestrated by elements of the FBI. People are currently in prison for the heinous crime of standing inside the building and taking photos, after being let in by Police. Plenty of good reading material and videos on Bitchute, Odysee, Gab et al that you can check out in your own time.

The concern I and many others have is that a state or private sector entity (or both) will stage something violent or ‘insurrectionist’ at one of these events along the lines of January 6th, which will generate god knows what in response from the powers that be (who will blame it on the protestors).

Or at the very least, it will manufacture consent for the pending legislation.

I and most others hope nothing comes of this, but history being the teacher than many refuse to learn from says this is usually how totalitarians seize power. Build the laws and tension in the background and a huge event then transpires, it’s declared an emergency and the subsequent wave of emotion and confusion is used to seize power.

If it happens anywhere in Australia, it will be Melbourne. It’s the furthest down the globalist nightmare road out of all the states and most cities around the world. It’s a Rockefeller Resilient City and a UN Strong City – if Sportsbet make a market this is where I’m putting cash on.

Very happy to be proven wrong and hope this weekend and protests after it transpire without incident, but given the direction of this year and everything else happening in the background, I’m convinced something nefarious is in the works. Watch your six if you’re attending the protests.

Other than that this is my concern too. Some kind of staged event. Capitol hill, Port Arthur 2.0 or otherwise.

Definitely on its way, that fake crossbow guy was a cop 👮

Is that perhaps why the arresting officers didn’t bash his face in, as they generally do?

The reason I have turned off watching the media. No investigative journalists. Just cut and paste a press release.

Even if what you suggest does transpire, there is no way an individual state can become totalitarian. They would be thrown out at next election, and if the election process is subverted the Federal government would intervene.

Different story if the Federal government tries it on with the support of the military.

A fly in your ointment
Guest
Reply to  Freddy

the Federal government would intervene.

that is if they actually disagreed…

Great article and in total agreement.

Staged event (or even real using a weak-minded patsy) to both scare the populace and help them associate anyone anti-vax/covid/government not only as a selfish, unhinged, covid-denier but also a ticking timebomb capable of domestic terrorism.

The proposed legislation along with curtailments imposed on unjabbed folk’s participation in society indeed fanning the flames of social tension.

Great article and in total agreement.

Staged event (or even real using a weak-minded patsy) to both scare the populace and help them associate anyone anti-vax/covid/government not only as a selfish, unhinged, covid-denier but also a ticking timebomb capable of domestic terrorism.

The proposed legislation along with increasing curtailment of unvaccinated folk are definitely fanning the flames of social tension.