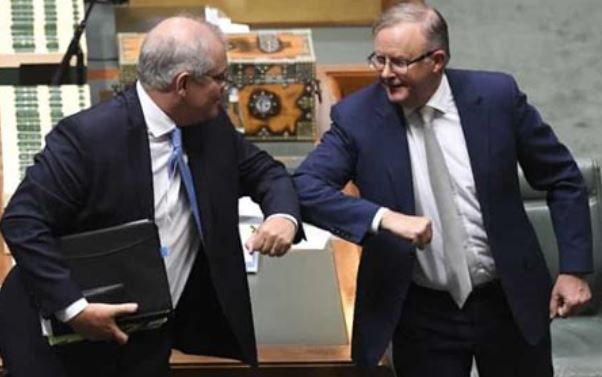 EZFKA’s two major parties, Liberal and Labor, have completed an official merger this morning after no Australian voters can tell the difference between them.

Prime Minister Scott Morrison and Opposition Leader Anthony Albanese made a joint announcement this morning, unveiling the new Laboral Party as a ‘new era’ for Australia.

“If it’s high debt, high immigration and housing – we have you covered. There’s no real need to continue the pretense that there is a difference anymore,” Morrison said.

“As WA has shown, a one-party state is completely achievable in this country.”

President Xi Jinping welcomed the move and is in talks to merge Australia with China at earliest convenience.

Ivermectin is out of patent so no money to be made there, expect soon a Pfizer / big pharma version of this to be rushed through for approval, we can’t have those billions of dollars going to waste on just anyone!

Labor’s primary vote is just over 30% and this rapidly decreasing. The LNP has around 40% and it is also declining. Just look at the senate which more reflects the primary vote and voters’ intentions and you’ll find that neither party can attain a majority.
I wouldn’t mark this as satire merely a spoiler alert. The two parties will have to merge or become minor parties. Yet, Ess Ay Pee can barely get above 1% of the vote when people don’t want to vote Laberal and want significant cuts to immigration.