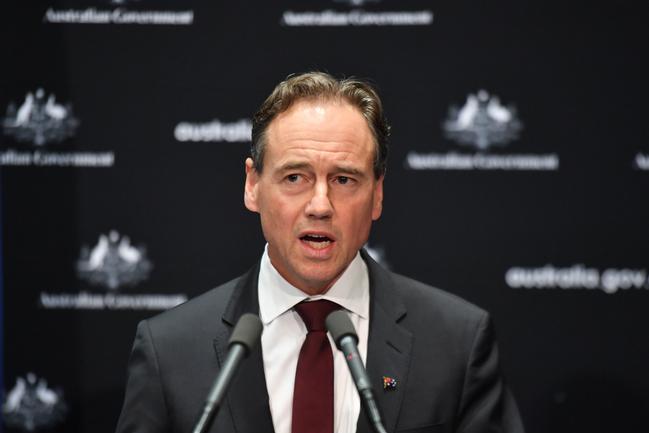 Health Minister Greg Hunt has denied accusations that his vaccine uptake statistics are completely made up, after claiming 4 trillion Australians were vaccinated yesterday.

The Minister stated the numbers were 560% accurate and that no inflation of statistics or deceptiveness, such as the difference between offering vaccines in aged care and taking them, had occurred.

“Honestly, we can throw any number out there in the mainstream media, as we have done all along with the COVID deaths and case numbers, and people will believe it. The real estate industry has shown us the way – FOMO. All we have to do is create the perception that this dangerous but apparently necessary thing is in short supply and people will do all kinds of stupid things just to get it,” Hunt said.

Hunt remained defiant about the tactics used to get Australians to take the vaccine.

“The TGA statistics on vaccine deaths are irrelevant, I stand by my statement that Australians are undergoing the largest clinical trial in history. Fortunately for us a lot of them are the useless eaters that they are, so a bit of fear, coercion and peer pressure and they’ll go rushing to get a jab that will do them untold harm in the end, but untold riches for our mates in the pharmaceutical industry.”

We’re aiming for what the UK has achieved, UK is lauded for their success with vaccines, everything back to normal, no-one wearing masks, but they are still having 30 deaths per day in the middle of summer.

So how do we go from being scared silly from 3 COVID deaths this year to accepting 12 or so COVID deaths per day (allowing for population difference to the UK) when everyone is vaccinated and restrictions are removed because that’s the aim of vaccinating everyone I take it?

When did we decide that 30 COVID deaths per day was the acceptable amount where we don’t have to socially distance and wear masks.

Right now we have ads on TV telling you you’re basically a murderer if your mother ends up in ICU with COVID, and most Aussies have that attitude where one death is too many, lockdowns and restrictions are sensible, they don’t want to have a guilty conscience and give it to a family member, etc.

Are these same people that are hysterical about a single death now going to continue social distancing, mask wearing when we go back to normal like in the UK?

The UK was quite happy to be vaccinated with AZ. It was cheap, easy to manufacture and to transport. It also has a decent effectiveness. As for blood clots, more people were dying of Covid, so the risk reward equation definitely favoured taking an AZ vaccination.

Australia’s media excluding Chris Uhlman have been wanting zero risk. No one should get Covid or die from it. Because of the zero risk, it is written that vaccination rates must be over 80%. It is going to be a long time before we can travel uninterrupted interstate.

Other countries have different risk thresholds and we will be stuck here with zero risk mentality. This mentality is not just for Covid, it is in the business world where it is lower risk to invest in property than to start your own company.

Many people are still going to get and die from COVID when everyone is vaccinated that’s unless they plan to quarantine, have lockdowns, have restrictions, mask wearing forever.

People will flip in an instant and decide a dozen or so COVID deaths per day are perfectly acceptable. It’s what Aussies do. If Channel 9 and Facebook tells them it’s safe outside then they’ll go outside again.

Probably when there is footage of people going to Bali and we are still stuck here then Facebook groups will be telling us we need to go out and live.

Really appreciate your comments on this aspect of our psych and how that pertains to covid. Thanks.

The circle jerking over vaccines is cringe. You want to be a guinea go right ahead.

This is the world’s largest IQ and courage test and many are failing miserably.

To be honest fuck them, they get what they deserve.

The numbers are bullshit. It’s an age old confidence scam to make you think you will be alone and miss out.

the world seems to be living in the tails of the distribution, in attempt to live with no risk. and yet there is risk everywhere in whatever you do.

when the f did this happen.

As someone else said here the other day, our cultural fear of risk has been laid bare and death me there are some absolute cowards among us. No one ever wants to admit it though.

Pneumonia was once known as the “old man’s friend.”

Old man, in the old days, in his 80s, kind of world weary, seen it all. catches it, slips into a coma, and goes away.

Apparently a “nice way to go”.

Dare I say that?

A nice way to go?

Well… we all have to go.

I guess we can all be kept alive a few extra years with modern medicine.

Yeah, my mum was a nurse. She often mentioned that is what they called pneumonia. At end of life, slipping away in you sleep is a much better way to go than so many other alternatives.

Compulsory gender diversity targets has seen increased neuroticism injected into every level of our national conversation. It has also increased the level of agreeableness, which brings on the paradox of agreeableness (as the level of individual agreeableness is raised throughout the group, the group becomes increasingly intolerant of disagreement), and which helps explain why there is so little actual ‘debate’ in the mainstream media.

Personality traits are a spectrum, however division between the sexes shows the median position for each trait to vary by slight degrees…. over the short term you don’t notice anything, but over the long term like an oil tanker crossing the ocean that is off by a few degrees, you end up thousands of miles from where you thought you were headed.

This is near hysterical social reaction, as narrated through our msm, is a disproportional emotional response to risk by society to a fact of life. This hysteria (note word origins) is being amplified significantly through our comparatively much more gender diverse media than existed in previous comparative epidemics – where the social response was a more grime and stoic, bear with it and get through it.

rofl yes re the origins of the word hysteria 😀