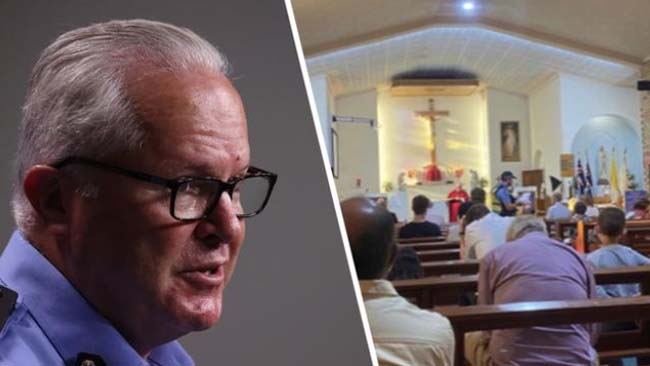 WA Police Chief Chris Dawson has confirmed that he won’t be enforcing mask or vaccine mandates at any synagogues, mosques or freemason lodges.

The announcement comes after outcry at Police entering a church to enforce mandates surfaced last week, sparking condemnation. WA Police confirmed that the strategy was only targeted at white christians, deemed as the most problematic.

“Jews, Muslims and Freemasons are deemed exempt under the mandates and we will not be enforcing the mandates or directions at any of their houses of worship,” Dawson said.

‘This is purely about the white working class who we deem the most problematic in terms of compliance.”

Dawson confirmed that People’s Armed Police constables may be flown in from China to assist the WA Police crackdown, due to their expertise with Christian churches.

Punitive punishment for not doing as globalists want. Just communism rebranded, thats all it is.

That’s why i don’t bother with all this pointless debate over vaccine efficacy, transmission, etc. It’s quite clear that this is a vessel to implement a whole range of nasty shit as well as try and head off the end of the money printing central bank scam.

There is no logic…

Here, this explains it all:

“I’m triple-dosed already due to being immunocompromised and am looking forward to getting my fourth booster next week. Just as with a flu vaccine, you get one every year. These people acting as if more doses of the Covid vax is doing anything other than keeping your immunity up have lost the idea of how vaccines work.”

This will fly, no matter how illogical it is on many levels. Particularly the last sentence is what explains the presence of cerebrally unfit cohorts in this (and sheet loads of other) nations.
The % of jabbadabbas in jabbadabbbistan is directly but inversely proportional to CF index. Mind you, there is no verifiable data apart from officials claims (and they never lie) that the local jabbadabbas are 95ish per 100. My estimate is not more than under 70% succumbed… based on the same public data. 😉

Speaking of which, anyone seen PJW’s latest video about China calling out multiculturalism? I don’t like China but they’re right. DLS and assorted cucks don’t want to call out the obvious at the expense of their kids.

Hopefully this weekend in Canberra goes as well

Mr Ponytail and screen printed shirt with his jeans and suit jacket like it’s 2003 is at it again. Only missing the Von Dutch cap and animal tooth necklace.

Funny how latecomers to the party don’t see the narrative has changed. No one cares about masks. Tonight at a local mall approx 20% do not wear or wear a chin warmer, another 60% leave the nose exposed and the rest wear face panties which are less protective than putting a mask discarded after an infected guy just coughed in it.
The numbers are “-ish” but not more than 10% error.

Edit:
I must agree that the mask wearing is indeed an IQ test, except it is inversely proportional to his metric.

I wonder if this guy exists in real life, you know, it’s him, his boyfriend and their adopted cats AND someone actually saw them – not a virtual personality and a stock image.

Darkhorse discusses if Australia is becoming a penal colony again.

A fly in your ointment
Reply to  pnut5678

Was it ever not?

Maybe it was just well hidden over the last few decades I think a lot of Americans and Europeans are genuinely shocked with the level of oppression on display here. The perception of Australia as an easy going nation is long gone.

Surely then just send in the tanks soon

The truckers are winning, they are still getting fuel, funds and now the US news channels are on the ground there so the amount of coverage of the police stealing gas, arresting 78 year old’s for hooting, police stealing firewood, false flag agents being exposed, is going to have a far greater audience than ever imagined, so if they send in the tanks now the world will be watching and Justin Tremble is going to get the boot from the WEF