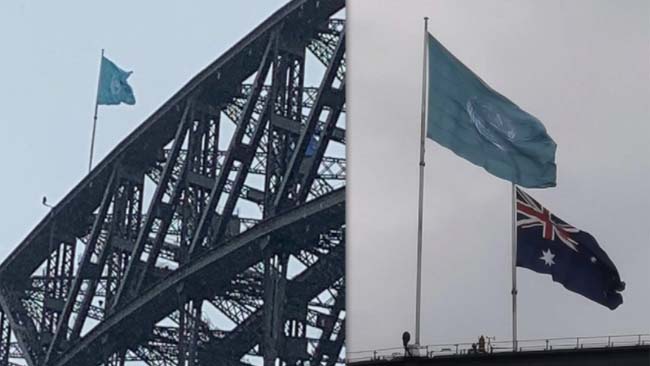 The UN has celebrated a decisive victory over Australia, by raising it’s flags over the Sydney Harbour Bridge and Parliament House in Melbourne.

The globalist organisation declared war on Australia in the early 1970’s and finally celebrated victory after a hard fought, 50-year plus subversion campaign.

“It’s a historic day. It started with the Lima Agreement in 70’s and it’s ended with COVID,” UN Secretary-General Ban Ki Moon

“The Strong Cities campaign in Melbourne was the factor in the end. The Police brutality managed to cower enough people into submission and now we can really begin dismantling what’s left of the country with Net Zero.”

Blue helmets are expected to arrive shortly to undertake a victory parade through Sydney.

A new battle is being waged in the superhero universe. It is the war over which of these comic book protagonists can be the wokest. And in the woke wars, Superman is winning by a mile.
Earlier this month, DC Comics revealed that the Man of Steel is in fact bisexual. The Guardian reports that in an upcoming comic, Superman’s alter ego Jonathan Kent will embark on a same-sex relationship with a friend called Jay. Jay is a reporter who provides care and support to Kent after he “mentally and physically burns out from trying to save everyone that he can”.
This comes after a host of other alterations to the mysterious man from the planet Krypton. The Guardian also reports that “recent issues have seen him protesting against the deportation of refugees, stopping a high school shooting and trying to put out wildfires that were the cause of the climate crisis”.
But the wokeness doesn’t end there. Superman is ditching nationalism in favour of borderless utopianism. According to Variety, his mission statement will no longer be “Truth, Justice and the American Way”, but rather “Truth, Justice and a Better Tomorrow”.
On the heels of these changes, one of the artists who works on Superman at DC Comics has quit, saying the company is ruining its characters. Colourist Gabe Eltaeb announced his exit on a YouTube livestream last week. “I’m finishing out my contract with DC. I’m tired of this s***,” he lamented. “I’m tired of them ruining these characters; they don’t have a right to do this.”
Actor Dean Cain, who played Superman in Lois and Clark, has also expressed his disapproval at the direction DC Comics is taking the character. He has labelled it ‘bandwagoning’ given how many other comic strip heroes have ‘come out’ as LGBT in recent times.
“Robin, of Batman and Robin, just came out as bi or gay recently and honestly who’s really shocked about that one?” Cain quipped. “I had some thoughts about that a long time ago.”
But Superman’s newfound sexuality, says Cain, is not brave or groundbreaking at all. “Brave would be having him fighting for the rights of gay people in Iran where they’ll throw you off a building for the offence of being gay … or fighting for the rights of women to attend school and have the ability to work and live, and boys not to be raped by men under the new warm and fuzzy Taliban. That would be brave.”
“There’s real evil in this world today, real corruption and government overreach, plenty of things to fight against,” he added. “Human trafficking, real actual slavery going on … it would be brave to tackle those issues, shine a light on those issues. I’d like to see the character doing that. I’d read that comic.”

German Defense Minister Annegret Kramp-Karrenbauer (AKK) threw in her full support for the new NATO nuclear war plan for conflict with Russia. The plan, released Oct. 21, according to Reuters, is a “confidential strategy” which “aims to prepare for any simultaneous attack in the Baltic and Black Sea regions that could include nuclear weapons, hacking of computer networks and assaults from space.” Called the “Concept for Deterrence and Defense in the Euro-Atlantic Area,” AKK told Deutschlandfunk on Oct. 21: “We have to make it very clear to Russia that in the end we … are ready to use such means so that it has a deterrent effect beforehand and nobody gets the idea, for example over the Baltic or in the Black Sea … to attack NATO partners. That is the core idea of NATO.” She continued, “this is being adapted to the current behavior of Russia—and we are seeing violations particularly of the air space over the Baltic states, but also increasing incursions over the Black Sea.”
Russian Defense Minister Sergei Shoigu responded to AKK yesterday: “Against the backdrop of calls for the military ‘containment’ of Russia, NATO is consistently pulling its forces toward our borders. The German defense minister must know well how this ended for Germany and Europe in the past.”
Sergey Naryshkin, the head of Russia’s Foreign Intelligence Service, followed up: “But does the current generation of some Western politicians remember the fate of their distant and quite close ancestors, who were trying to come into the Russian land with arms in their hands? Let us advise them to study history very well, which is real history without any embellishments and, even more so, without falsification.”

Wait for the U.N Administrator, who will hold jurisdiction all over EZFKA, to send letters to inhabitors here stating,

…our records show you have two unused rooms at your (our) residence, please welcome two new families, who will reside in these rooms. The Blue Planet Foundation, thanks you for your initiatives to save the planet.