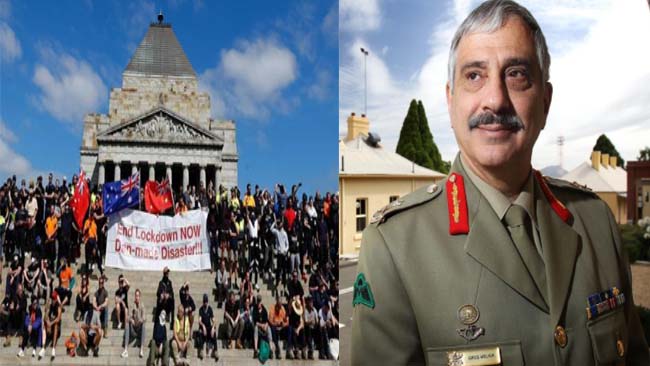 The head of the RSL has lashed out at anti-lockdown protestors who were shot by Police protesting outside the Shrine of Remembrance last week.

RSL President Greg Melick said that it was disgusting that people were appealing to the people who sacrificed their lives for their freedoms.

“Yeh, we were nowhere to be seen on the RSLs being closed down the last two years and the cancellation of ANZAC Day two years in a row, but that’s besides the point,” Melick said.

“I bloody helped personally fence off the Shrine at ANZAC Day and these bastards come along and disrespect it is just bloody unbelievable.”

Melick said he’ll be spending the next few days finding his balls and considering his position as another of EZFKA’s institutional quislings.

This year, there was no marches for ANZAC as it was deemed too risky. Yet the MCG was almost at capacity for a football match. The army veterans are not all old and it is not as though it is solely young people who watch aerial ping pong.

sportsball is a distraction, ANZAC day is for commemoration and reflection, and perhaps the message hits a little close to home for the powers that be.
Or the destruction of culture is the primary goal, or both.