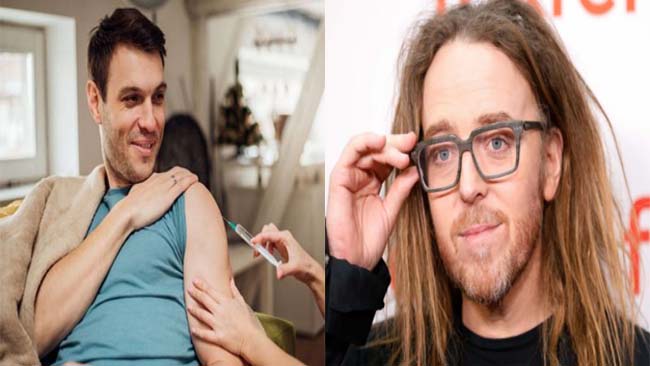 A Sydney man who was initially hesitant about getting the COVID vaccine, has been persuaded to get the jab after an advertising campaign calling on people to get vaccinated from Australian musicians and celebrities.

Dave Lewiston of Newtown, said he was initially hesitant and had long-term reservations, but it was ultimately Tim Minchin and other entertainers talking down to him that got the jab in his arm.

“It’s clearly been shown that patronising messages from people who deem themselves above everyone else are received well. That’s what pushed me over the edge and now I’m double jabbed,” Dave said.

Minchin said he felt comfortable being the figurehead of the campaign.

“I’m renown for image-crafting my public persona as being some kind of sophisticated ‘science-driven’ intellect, when I’m really just a narcissistic, lefty wanker who isn’t really that funny.”

The campaign will also premiere on tv across the nation.

Is the little b@tty boy going to be doing big superspreader comedy shows int he future where the vaccinated spread their disease and filth with one another in a closed environment then take it home to their unvaccinated kids or the 40-60% of people who don’t get any kind of short lived immunity with Pfizer?

Clearly they don’t work or of limited efficacy.

This is junkie behaviour. Like an addict getting his next fix.

In fact it’s worse than that because it’s unprecedented to inject someone so often with vaccines that give a powerful response, zero data past the immediate short term.

The longer this goes on the more I loose faith in the CHO’s, I already lost faith in the fuckwits in charge a long time ago so no loss there.