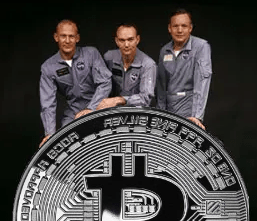 It has now been about 18 days or so since the last  Bitcoin bulletin, when MB’s “Kilowrong” achievement (ie the event of being exactly 1,000% wrong) was marked.

Overnight we saw Bitcoin rocket right through $56,265, which – according to the ancient apricotwood abacus-  is exactly ELEVENTY HUNDRED PERCENT (1,100%) up from when the much maligned “going to zero” call was made by the MB space cadets, as they blithely beheld the mighty coin was on the launchpad, at $5,115. This is the “Apollo 11” achievement:

I’m not sure what achievements are there to be unlocked beyond Apollo 11/eleventy hundred percent.

From the point of view of aesthetics, perhaps once you get to the moon, it’s good form to stop counting and putting notches on the bedpost?

As an aside, the compression of time scales in which the milestones are being hit is beginning to be quite worrisome. First it was 18 months, then 18 weeks, now 18 days.

I do harbour grave concerns over what might now happen in the next 18 hours!

Well give they’ve just printed another Billion in Tether, so the Tether printers are still operating just fine. Obviously they rest them every couple weeks for a few days to encourage a good pull back to support and wash out the levered longs – I predict we’ll see at least $64k by Sunday night:

The issue comes when we get to the 31 March, which is the end of the US tax year and when lots of real selling, for real USD occurs as the piper plays his tune and the tax man sticks his hand out to be paid.

My bet is that with several Trillion dollars in paper gains and hundreds of billions in realised gains as crypto traders euphorically chase the dragon switching between booming alts, there will shortly be 10s of billions in selling pressure for real USD fiat. Tether now routinely prints $1b – which is enough is enough to pay miners to defend the network for 20days…. when tax time comes in order to keep the price inflated its gunna have to start printing $1b * 10 per day

I have a bet with Peachy that BTC will be back below $20k by 10 April…. that might be a bit too aggressive, maybe 10 May but a bet is a bet.

But the $1b tether was minted only after the $4k-per-coin run up in price. ($80b market cap increase).

so maybe the causation is the reverse of what the tether doubters would have. Ie very traditional causation – btc goes up, creates more demand for tether, more tether is printed.

Quite possible, or possible that the exchanges just sat on what they had until they pumped it up and the $1b is simply going to replenish their coffers.

I suppose the test will be when/if Regulators pull the rug out from under Tether, or should I say the Tether rug out from beneath BTC.

If Tether has played no part in inflating BTC then removing it from the eco system should not have any effect either, as Tether simply followed BTC up.

This looks like it includes the 1bn from the Whale Alert link I included in the previous comment, plus another 400m.

Trillion bucks says its not going to 0…

Pithy and to the point.

We do seem to be well past the point of going to zero being a serious likelihood.

there is too much at stake. The deflationary suckhole of $1t of wealth effect disappearing would spook even the central bankers who likely hate btc.

I do harbour grave concerns over what might now happen in the next 18 hours!

Well, precisely nothing happened in the subsequent 18 hours.

Peachy plans to be on pins and needles prior to the Ides of March, though.